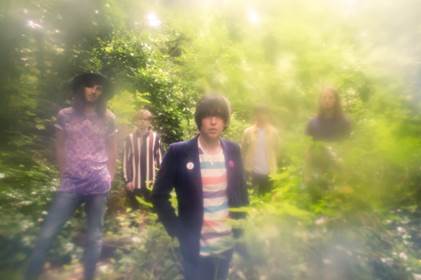 “With its epic, stadium-indie guitars, baggy beats and trippy lyrics, this Suede-meets-Oasis numbers sets Sulk far above other 1990s revivalists” – The Independent

The time is suddenly right for well-crafted British pop – there’s a thirst for new century psychedelia which is where London quintet SULK fit in. Steeped in the rich traditions of classic British songwriting, the band could be said to begin where the 90s ended with solid musicality, joyful uplifting harmonies, giant psychedelic guitar riffs and of course, tambourines.

They’ve been compared to just about every great Britpop band of the 90s, but SULK are very much their own men; musically tight and lyrically beautiful with sun-drenched vocals, ethereal guitars and pounding drums, rooted in 90s vibes but with their gaze to the future. This is anthemic bliss for a whole new generation.

The band released their debut LP, Graceless, in 2013. The ten track album was recorded and produced in Brussels by former Suede, Pulp and White Lies associate Ed Buller and mixed by Jonas Verwijnen and Antti Joas in Berlin.

After releasing Graceless and having done numerous shows and tours, including a full UK tour with Happy Mondays, SULK entered the recording studio to continue their journey on the musical atlas’s uncharted routes. Big Jelly Studios, a converted Neo-Gothic church located in the seaside town of Ramsgate, was the host of a month long recording session. Supervised and conducted by producer/mixer Jonas Verwijnen over twenty demos blossomed into a colourful mix of well-crafted pop tunes. Sticking to their basic musical values of classic indie, pop, shoegaze and psychedelia, but adding elements of motown beats, sitars, Love-esque vocal harmonies and Lynchian cinematic atmosphere SULK’s sophomore creation, No Illusions, stays true to its heart yet elevates itself to a point seemingly different to its older sibling.