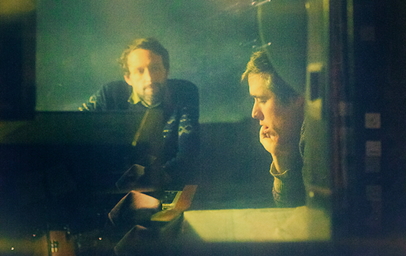 [On ‘Violets’] soft electric guitar loops and gentle percussion give way to a short, albeit strong and more forceful guitar solo. Kivel’s signature falsetto quavers and croons lyrics that express what he calls his ‘unsettling relationship with true crime.'” – Interview Magazine

“Violets” is the third single from Matt Kivel’s upcoming LP, Janus which will be out on Friday, February 5th, 2016 via Driftless Recordings. The album was produced by Alasdair Roberts(Drag City) and engineered by Sam Smith at Green Door Studio in Glasgow, Scotland (private streams and downloads available for review consideration).

Matt announced the new album in September along with the title track “Janus” which Stereogum described as, “a soft and delicate and pure and real – the silky instrumentation starting out quietly before blossoming wonderfully.” CLASH Music said the second single “Jamie’s” was a “gentle lament” with “expert storytelling” – “Matt Kivel’s voice unravels across the minimal sonic template which is occasionally shot through with blasts of feedback.”

Janus is Matt’s third studio album and is currently available for pre-order via Driftless Recordings.

Los Angeles-based songwriter Matt Kivel got his start working as a player in various bands during the first decade of the 2000s. Around 2013, Kivel quit playing with other bands to focus on his solo material. The first evidence of his work came in the form of some limited-run cassettes, but he truly came into his own with 2013’s full-length album Double Exposure, released on the Olde English Spelling Bee (Julian Lynch, Ducktails) label. Kivel’s solo work took a decidedly more subdued path than his previous affiliations, with shimmering ambient synths meeting muted acoustic songwriting and understated vocals. Second album Days of Being Wild, recorded with Palace Brothers member Paul Oldham over the course of the previous summer, saw release on the Woodsist label in 2014. The record found Kivel stretching out a bit more, both compositionally, and in his arrangements, which introduced more rhythm, dynamics, and melody.

In late 2015, Kivel joined songwriter Alasdair Roberts (Drag City) in his native city of Glasgow, Scotland, to record his third full-length album Janus. Roberts produced the project, and assembled a stylistically diverse supporting cast of local musicians to supplement Kivel’s desolate, acoustic songs. Over 11 musicians contributed to the music on the album, and their improvisations and sensitive instrumental interplay draw from the realms of avant jazz, traditional folk, classical, outre experimentalism, and straightforward melodic pop. Kivel’s vocals are pushed to the front and his lyrics cut clearly through the shifting instrumental backdrops. The album is simultaneously calm, warm, and uneasy. Never far from darkness.

Janus isn’t always an easy record to take in; despite its easy-going recording process, it’s home to some of Kivel’s darkest material yet. However, as a marker of where folk music can go in 2016, and as a document of a friendship between two musicians at the top of their game, it’s essential listening.