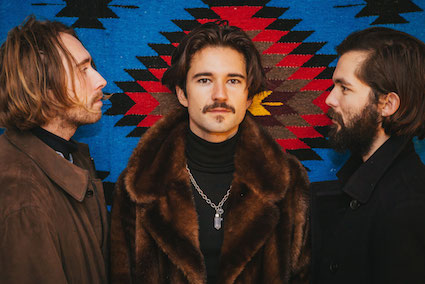 Back in August, 2015 Cornwall 3-piece Lost Dawn put out the single Electrify. The release followed their eponymous debut album out in April of the same year, and whilst the track was praised for its “pop-perfect indie-rock” [Fred Perry Subculture], it was actually a teaser for a more experimental sound to come.

On 5 February, 2016, Lost Dawn are releasing their new 6-track mini-album Fever. The record was, as frontman Stanley Duke explains, “written a lot through jamming, playing without thinking about whether something is in key, or in Hme, than pulling the madness together into a structure. It’s all ordered chaos.” The inclusion of a third bandmate, in the form of bassist Joel McConkey, meant the once two-piece, Duke and drummer/producer Benjamin Woods could “be a little more experimental with the music and really pushed the sound of Fever.”

The more spontaneous, rawer approach to the recording of the Fever mini album doesn’t in any way negate Lost Dawn’s Midas touch for crafting infectious songs. A foremen honed single and Fever opener Electrify is indie-rock gold, Construction Rock is a stomping 70’s rock anthem and Naked Lunch reminiscent of The Strokes energised story-telling garage-rock. Than there’s the title-track Fever which, with its lulling Velvet Underground-esque tones, feels like a ready-made classic, and noteworthy for showcasing the gentler side of Lost Dawn’s sound is closing track Águila, a enveloping, hazy trip to calm the senses.

Fever showcases a band who are rapidly evolving and growing, a band who can produce single-worthy songs in what is essentially an unpolished jamming session recorded at Falmouth’s Troubadour Studios, whilst never losing full possession of their experimental core which had Clash recently declare them “visionaries”.