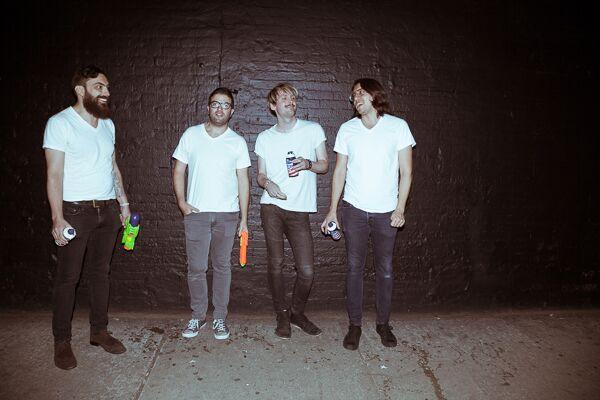 Notes of Lou Reed and The Modern Lovers in this cool punk-pop number Metro
Oddball storytelling Timeout New York
Excellent iTunes
This is one of ‘those’ records: a record that can be felt as easily as it can be “heard”… a world both living and forgotten; a world of sights and smells and spectral memories John Murry

Crackling garage rock meets literate indie rock in a sound marinated in the extremes of New York City on Music For Outcasts, the full-length debut and first UK/European release for Leland Sundries. It comes out February 26 2016 on L’Echiquier Records in conjunction with Décor Records, and places Leland Sundries in the context of bands that combine literacy with overdrive such as Silver Jews, Deer Tick, Jack Oblivian, The Hold Steady, Johnny Thunders, The Modern Lovers and Ezra Furman.

Leland Sundries is the portmanteau under which frontman Nick Loss-Eaton and an ever-evolving roster of Brooklyn, NYC musicians produce the kind of careering, scrappy garage rock which has -via nascent EP releases- already earned the band nods from The New York Times and Timeout. Music For Outcasts itself was shaped by the fall out from two particularly pivotal events in Loss-Eaton’s life, the last few years of which have seen him not only recover from alcohol dependency, but go on to survive emergency open heart surgery. Fairly white-knuckle, stare-down-your-mortality fare for anyone, never mind someone barely out their twenties, and a live-it-out experience which bears its blackly humorous mark across Music For Outcasts.

Ironically, the surgery itself presented Loss-Eaton with the opportunity for his first ‘holiday’ in over 4 years- a chance which took him (not entirely to his doctor’s ease) to the UK & Europe for several weeks, to begin work on what became Music For Outcasts. He says, “I hooked up with UK artist/producer Alexander Festival Hall to demo the songs in his tiny East London studio.” Studio recordings were then made in an unheated loft studio in Nick’s old neighbourhood of Greenpoint, in a former creamery building nestled next to a bridge between Brooklyn and Queens, much of it recorded on analogue tape.

Around half of the tracks which comprise the record were written prior to Loss-Eaton’s recovery from alcoholism, rendering them – as Nick wryly noted during subsequent recording sessions – ‘time capsules back to a time of desperation’. For evidence of this pressure-cooker effect in microcosm, look no further than the surf-rock wash of ‘Greyhound From Reno’, which zeros in on the pill-hazed, midnight exodus of a shady character skipping town. Whilst the track lampoons its sleazy, washed up protagonist, Loss-Eaton delivers its underlying inference direct to the mirror, written as it was at the tail end of his addiction; ‘It’s impressionistic, non-linear, but that sense you can’t outrun yourself is palpable’.  The track came eventually came together in aptly chaotic fashion during late-night recording takes; ‘We turned out all the lights in the studio and it got weird. I sang and screamed until I went hoarse, and it felt like an exorcism of panic’.

Elsewhere on Music For Outcasts, Loss-Eaton turns the microscope on his own scars with a similarly unflinching candour. ‘Freckle Blues’ (written whilst New York was holed up during Hurricane Irene) equates the elapse of time since a relationship’s demise with his own date tally of sobriety, and ‘Maps of The West’ traces an ill-advised foray into dating whilst in the early stages of abstinence. ‘They recommend against this, and I soon saw why’ recalls Nick; ‘I fell hard for her. Should have known it wouldn’t work out when she took me to a bar. She drank whisky, I drank seltzer.’ That said, the song nonetheless taps the fledging stability that his recovery brought to proceedings; ‘I found a measure of hope in being sober that wasn’t there in my life or my writing before’.

And yet beyond the more personal scorched earth the record rakes over, there is a wider resonance within the world of misfits and missed connections that Music For Outcasts inhabits. Fittingly for one who snatches fragments of lyric ideas from overheard conversations & glimpses into the lives of others, the characters and vignettes which Loss-Eaton summons here are so vivid as to become almost tangible. ‘Stripper From Bensonhurst’ mines far beyond the attendant stereotypes to chart the push/pull between a grim domestic semblance of normality far more intolerable to this woman than her nocturnal ‘other life’, whilst the taut, Spoon-esque snap and swivel of ‘Radiator Sabotage’ paints a world of burnt-out glamour as palpable as any of Lou Reed’s succinct dispatches. Even the track titles themselves – ‘Studebaker’, ‘Wallace ID’ – function almost like projector slides, brief flashes of narrative which demand conjecture.