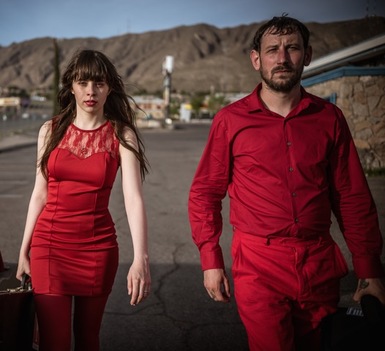 LE BUTCHERETTES JOIN AT THE DRIVE IN ON SPRING TOUR OF EUROPE
The consistently excellent rocking tour de force that is Le Butcherettes have announced the latest chapter in their sustained touring efforts, that in the past year alone have taken them across North America, Japan and Australia alongside Melvins and Faith No More, as well as a headline tour in Europe. The trio will be joining At The Drive In for a run of dates across Europe, beginning at the tail end of March and taking in Dublin on 26/03 and London 27/03 – see the full run of dates below.

LE BUTCHERETTES TOUR DATES SUPPORTING AT THE DRIVE IN
26/3/16 Dublin Ireland @ Vicar Street
27/3/16 London, UK @ Roundhouse
29/3/16 Paris France @ Le Trianon
30/3/16 Cologne Germany @ Palladium
31/3/16 Amsterdam Netherlands @ Melkweg
1/4/16  Brussels Belgium @ Ancienne Belgique (AB)
2/4/16  Luxembourg @ Den Atelier
4/4/16  Berlin Germany @ Columbiahalle
5/4/16  Veinna Austria @ Vienna Arena (Arena Wien)
7/4/16  Milan Italy @ Fabrique
8/4/16  Lausanne Switzerland @ Impetus Festival
10/4/16 Barcelona Spain @ Razzmatazz
Based in Guadalajara, Mexico, Le Butcherettes is the loud and vivacious brainchild of Teri Gender Bender (vocals and guitar), joined by drummer Chris Common (These Arms Are Snakes) together creating downright enjoyable detonations of off-kilter rock that ooze charisma and light up every live show that they play. A Raw Youth, the band’s third album, released in September of 2015, focuses on “the recurring conflict between minorities (the raw youths) and society: The oppressor and the oppressed” as Le Butcherettes’ mastermind Teri Gender Bender explains. A pair of singles: “Shave The Pride” and “They Fuck You Over” were shared in advance of release. The album features an appearance by close friend Iggy Pop, who duets on vocals on the heady, hazy track “La Uva”, which you can watch the recording of below. In addition, John Frusciante also joins the fray by guest starring on album track “My Half”. A Raw Youth was recorded at RLP Studios (The Morgue Portable Disaster Unit) in El Paso with producer Omar Rodriguez Lopez.
WATCH THE RECORDING OF IGGY POP’S VOCAL TAKE ON ‘LA UVA’
WATCH TERI AND THE MELVINS JAM ‘REBEL GIRL’

Le Butcherettes also recently joined the ranks contributing to Joyful Noise’s well-established and finely curated flexi-disc series for 2016, this year alongside  Thurston Moore, Julianna Barwick, Ought, Lil Bub (featuring Aesop Rock and Kimya Dawson as the Uncluded), Prince Rama, Sondre Lerche, Chris Cohen, Ava Luna, Swirlies, Don Caballero, and Briana Marela.  Each release is strictly limited to a one-time pressing of 1000 copies on clear, single-sided, square flexi-disc (with full cover art chosen by the band). These songs will not be released digitally or on any other format. That is to say, the total existence of each recording is limited to just 1000 copies, on an increasingly-degrading analog format. More information regarding Le Butcherettes’ instalment will be made available nearer its release. Check out more details at the Joyful Noise site.
PRAISE FOR 2015’S A RAW YOUTH
“A Raw Youth is a blinding success, which is entirely down to the smart songwriting on display…the forceful grooves and punk explosions of Stab My Back are startling but its the Blondie-inspired disco punk of Sold Less Than Gold…that proves Le Butcherettes are more than just a live act.” – ROCK A ROLLA
“A coherent yet dynamic diversity in its delivery. What unites the songs is its punk rock thrashing and soulful scream of The Gender Bender…a great punk album.” – VIVE LE ROCK
“A Raw Youth aims to sabotage meathead rock and succeeds. Le Butcherettes preserve all the best parts – the rush, the muscle, the vocalist as GOD – but expose the celebrated macho ego as a terrorising other.”  – DROWNED IN SOUND
“Her [Teri Gender Bender] combination of force and keen observation is reminiscent of Corin Tucker at her best, though Gender Bender’s performance is all her own.” – NPR
“Listening to A Raw Youth—the fourth album from Le Butcherettes—is what it feels like to discover Iggy Pop and Black Flag while your village in Mexico gets torn apart by psychological terror.” – NOISEY
“On A Raw Youth, Le Butcherettes find the perfect balance of oddball ideas and actual hooks, creating a heavy, sweaty avant-rock hybrid that’s as catchy as it is bewitching.” – MAGNET
lebutcherettes.net
www.facebook.com/LeButcherettes
twitter.com/lebutcherettes
ipecac.com

The Next 12 Months With….. Hey Little Monster!