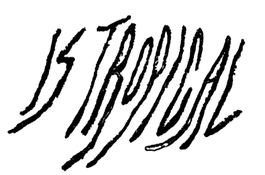 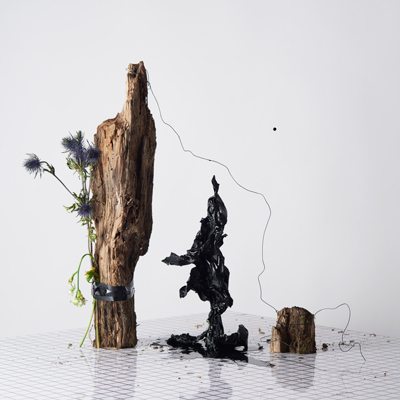 IS TROPICAL have announced the release of new album ‘Black Anything‘ on 11th March via NYC based Axis Mundi Records, shortly after the fourth instalment ‘Follow the Sun / Now Stop‘ comes out on 12th February.

Things don’t always go right for a band. Getting pretty much every music video you’ve ever made pulled off of the internet isn’t a good look. Contracting Hepatitis from the Moscow river isn’t the best thing to tell your parents over a Christmas dinner; let’s face it, nobody really wants to get arrested in Mexico, and having a supposedly good friend completely empty out your band account just before you start recording a new record, isn’t the greatest luck – but what IS TROPICAL lack in luck, they make up in spirit. Emerging from a South London squat scene that sadly no longer exists, the newly formed IS TROPICAL decided to turn their backs on the dark times and look for inspiration elsewhere. For their third album ‘Black Anything’, they set themselves a rather large task, for a band so broke: record across five continents – North America, Africa, Europe, Asia and South America.

One strength IS TROPICAL have shown since the early days is that their music works equally well in a late-night basement party or a giant festival stage. This complete disregard of boundaries, geographical or musical has led them further and further afield over the years, and they have toured everywhere from Seattle to Ulan Baator. They’ve made a record which is equally well travelled, and one which sets up in its breadth but also its coherence a snapshot of a year of physical and musical exploration.

‘Black Anything‘ is, in retrospect, a very dark record. Nocturnal, sleep-deprived, warped – but every track on the album has pieces of the place it was recorded imprinted on it. Never missing IS TROPICAL‘s pop sensibility, ‘Black Anything’ is the sound of a late night, somewhere, anywhere.

‘Black Anything Pt.4‘ was recorded in Asia. “Having been to Asia a few times prior to recording ‘Black Anything‘, the one thing that strikes you is how vast and culturally expansive Asia is as a continent. It was never our intention to travel to these continents to make songs that would sound like local traditional music, but more a case of trying to let the surroundings seep into the recording process subliminally and enrich the music. To make only 2 tracks that ‘described’ or ‘felt’ like Asia was impossible, but one thing that had always stood out whilst travelling there was the sun.”

Quite aptly, the single taken off Pt.4 is ‘Follow the Sun‘, a homage to the importance of the Sun in Asian culture “The song was written from seeing this precious imagery everywhere and using it as a metaphor for trying to be a better person. We wanted a song that could take people out of that negative mind set and show something altogether more positive. We’ve always focused on escapism, often that would revolve around writing about physical places we wanted to be, but this time it was about escaping mentally to a much better place”.

‘Black Anything‘ will be released on five 10” transparent picture disc instalments, containing 2 tracks per vinyl and displaying the continent in which it was conceived. The five vinyls when displayed on top of each other create the globe, unifying the concept as a whole – each vinyl existing as an artwork and tribute to the continent it was recorded in.
Pre-Order ‘Black Anything‘:
Vinyl bundle here via Axis Mundi Records
Digital Download via iTunes
VIEW THE PROJECT IN MORE DETAIL HERE: istropical.com/press
www.facebook.com/ISTROPICAL
www.twitter.com/istropical
www.istropical.com
www.instagram.com/istropicalofficial
www.soundcloud.com/istropical
www.youtube.com/IsTropicalVEVO

Radical Face premiere video for ‘We’re On Our Way’‏