For Fans of… Warpaint, Waxahatchee, Daughter
HAWK have revealed their latest video for forthcoming single Once Told, out February 19th 2016 via Veta Records.

The video premiered on Noisey but you can watch it now via the band’s YouTube channel.

Once Told tackles Ireland’s archaic abortion laws, where it’s still illegal to have an abortion, with the exception of very rare circumstances. Julie Hawk explains: “This song is just a tiny fraction of the frustration that’s being felt every day.”

Showcasing a darker, grungier and ultimately bigger sound, Once Told is the first track to be taken from the band’s upcoming self-titled EP, which will be released on 15th April 2016. The band collaborated with producerDimitri Tikovoi (Horrors, Placebo, Marianne Faithful) on Once Told with the track mixed by Catherine Marksbest known for her previous work with Wolf Alice and Howling Bells.

Since the release of their last EP Clock Hands in 2015, the band can already count the likes of The Line of Best Fit, Noisey, Clash, Music Week, The Irish Times, Radio X’s John Kennedy, Amazing Radio and BBC 6Music’s Tom Robinson and Chris Hawkins as keen supporters.

Once Told will be released via Veta Records on February 19th 2016 with self-titled EP HAWK out on April 15th 2016. 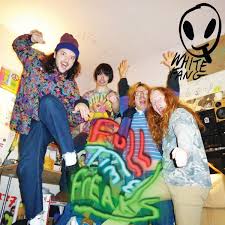