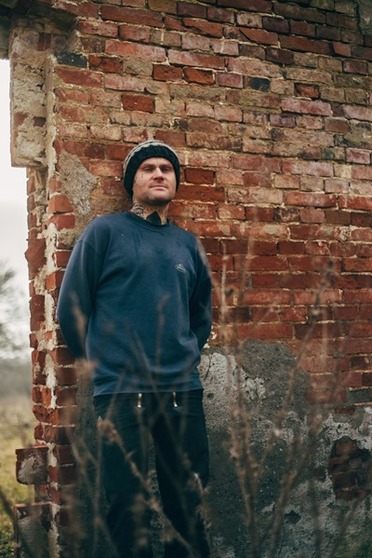 FRIEDEMANN TO RELEASE SECOND LP VIA EXILE ON MAINSTREAM;
‘GEJAMMER’ + ‘HABEN UND BRAUCHEN’ VIDEOS RELEASED,
TOUR WITH CONNY OCHS NEARS
Germany’s Exile On Mainstream is preparing for the late January release of Wer Hören Will Muss Schweigen, the second album LP from enigmatic singer/songwriter Friedemann. Two new videos from the album have been released, and preorders for the LP have been posted.
Every time has its voices, every era has its singers. If these singers are able to illustrate the specifics of their time and take us by the hand, showing us a new conceivability and let us recognize what we have to do with it, their voices will remain with us. And they will make us realize that we are a part of it, we are there, right in the middle. These artists remain a rare breed and they are the ones who not only say something but tell it and they leave us in bliss, and a tiny bit more geared-up for our everyday life. Their contribution is here and now, truthful but transient at the same time.
Friedemann’s debut album, Uhr vs, Zeit, released through Exile On Mainstream in 2014, is one of these records, timeless, whose contents – individuals and society, personal destiny and social life, meta level and microcosm are interwoven to one blissful flow, equipped with true words and meaning.
Now Friedemann delivers the second album Wer Hören Will Muss Schweigen (‘One who wants to listen, gotta keep quiet’) – an album with more rhythm, melodies, topics, more thoughts and…more joy. The whole album draws from his search for new ways of expression while channeling experiences from the past year – touring and maintaining his rural lifestyle. This all is woven into poetry describing how oddity and sense of responsibility, alterity and community are not antagonisms anymore. Life, Friedemann sings about it and one can feel how much he loves life and we are invited to follow. The life he lives illustrates the songs with a profoundness one can feel, even if you’re not familiar with his lifestyle.
Two new videos from Wer Hören Will Muss Schweigen are now available to the public;
WATCH THE LP’S OPENING TUNE ‘GEJAMMER’, AND THE NINTH TRACK ‘HABEN UND BRAUCHEN’