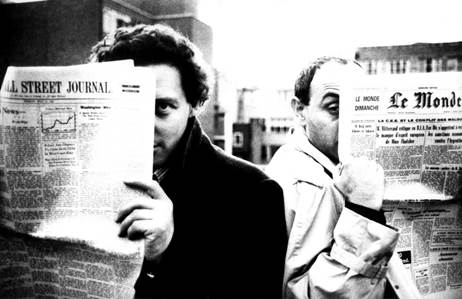 ‘Around The World With’

A lost classic given the definitive reissue treatment.

The (Hypothetical) Prophets were a collaboration between French electronic pioneer Bernard Szajner and British musician Karel Beer, recording something of a Soviet-themed concept album under the pseudonyms Joseph Weil and Norman D.Landing.

Known to aficionados of new wave and minimal synth/synth wave/cold wave, the album has rarely been heard since its original release on CBS/EPIC. In 2004 two tracks were included on the compilation ‘So Young, But So Cold: Underground French Music 1977-1983’ and in recent years it has been cited as a seminal album by specialist blogs such as Mutant Sounds and Systems Of Romance.

The collaborative project between Bernard Szajner and Karel Beer started in 1980 with a one-off concept single under the name ‘Proroky’ (Russian for ‘Prophets’) on their own Hypothetical Records, under the guise of a fake Soviet pop group.

Quickly picked up for re-release by CBS in France, the group re-christened themselves the (Hypothetical) Prophets and followed up with a chilling minimal wave EP, ‘Wallenberg’, about the titular Swedish diplomat who had saved thousands of Jewish Hungarians from the death camps. The creators recorded French and English language versions of the A-side, with a long-term aim of releasing a version in every language for each international territory!  CBS passed on this option but were keen for the group to do an album, and so the idea of going ‘Around The World With The (Hypothetical) Prophets’ was born.

The completed LP received some attention on release but the highly conceptual nature of the tracks (like reading out personal announcements from Time Out London and The Village Voice New York over the chugging synth-pop of ‘Person To Person’, or adapting the BBC shipping forecast for ‘Fisherman’s Friend’) and anonymous presentation of the group (Szajner and Beer adopted the pseudonyms Joseph Weil and Norman D. Landing) left many confused. They were forgotten by most people until the mid-2000s when their singular take on new wave started to be re-discovered by a new generation of cratediggers and bloggers.

‘Around The World With’ has now been rescued from oblivion by InFiné, whose edition of ‘Around The World With’ recreates the original album’s tracklisting, but is re-sequenced as the musicians originally intended. Bonus tracks are taken from their EPs, and this is the first time that the majority of this material has been heard since its original release.

Prior to ‘Around The World With’, InFiné lovingly reissued ‘Visions Of Dune’ by Bernard Szajner in 2014 to much critical acclaim:

“Jaw-droppingly out there even now, 35 years later” Pitchfork
“Stands tall as a uniquely sublime achievement” Dazed
“So ahead of its time that it still sounds like the future today” Dan Snaith (Caribou)

“The remastering is fantastically vivid; the bundled bonus tracks are cracking. Belter!” FACT

01 Around The World With The Prophets

02 Back To The Burner

02 On The Edge Of The White Zone

01 Around The World With The Prophets

02 Back To The Burner

07 On The Edge Of The White Zone