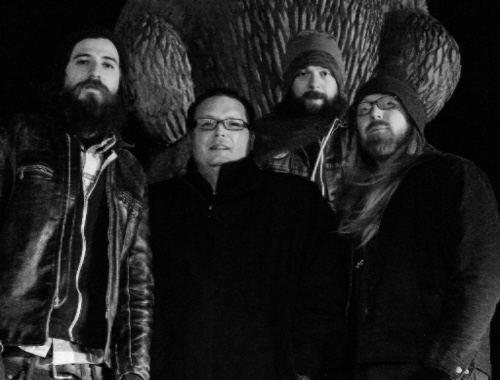 Ripple Music is thrilled to announce the signing of Michigan quartet Bonehawk, and with it the worldwide CD release of their debut album, Albino Rhino.

The story of BoneHawk is one that started as early as third grade, in an unassuming Kalamazoo school, where guitarist/vocalist Matt Helt and guitarist Chad Houts first met and bonded instantly over a shared appreciation of video games, pizza, poster girls and rock and roll. At the age of fourteen, Helt, already an accomplished drummer would jam along with Houts in the family’s basement to songs handpicked from the pair’s ever growing record collections. As the years passed by with each feeding the other on a steady diet of thrash metal and classic rock, when Helt eventually succumbed to the bug and traded in his drum set for a guitar, the duo quickly discovered that being in a band meant everything.

After toiling in various local outfits for years, around 2006 Helt and Houts formed Mesa with close friend Joel Wick (Quixote, Jihad), with the three deciding to put together something that paid homage to the heavy riffs they discovered as teens growing up in the mid 90s. Specifically, that beguiling breed of heavy rock directly influenced by the mighty Black Sabbath. The band would only release one record during this period, a 7” on Michigan’s UFO Dictator Records before breaking up to clear a path for the official formation of BoneHawk in 2011.

Helt and Houts envisioned combining Iron Maiden and Thin Lizzy-esque harmonies with the straight-up grooves of Sabbath, Led Zeppelin and the twin guitar assault of Judas Priest and Kiss. Enlisting old band mate Chris Voss on bass, after the departure of Wick the trio set about recording their debut album Albino Rhino, with Helt taking on vocal duties and returning to the drum stool.

Recorded and mixed by Jim Diamond at Ghetto Recorders in Detroit and initially released as a limited run of ‘Albino vinyl’ through Hornacious Wax Records in 2014, with newly appointed personnel in the form of drummer Jay Rylander and bassist Taylor Wallace (formerly of Wilson) the band played packed out local shows in support of the record. In less than two months all double LP copies of Albino Rhino had sold out, calling for a second ‘Ultraviolet Purple’ pressing and leaving Ripple Music boss Todd Severin in no doubt about the band’s true potential.

“We’re thrilled to be working with Bonehawk,” explains Severin. “From the moment I heard their two guitar blitz I was hooked on their sound. Albino Rhino is a masterwork of modern harmony guitar and post NWOBHM heaviness, with real stoner grit. A true gem of an album and we’re excited to be involved in the worldwide release of this CD.”

BoneHawk’s Albino Rhino is officially released on CD through Ripple Music on 22nd April 2016 and is preceded by the release of ‘Los Vientos’ as part of the label’s Second Coming Of Heavy series which will be released later in the year.

To order a vinyl copy of BoneHawk’s Albino Rhino on vinyl visit https://bonehawk.bandcamp.com