To celebrate 40 years of Punk 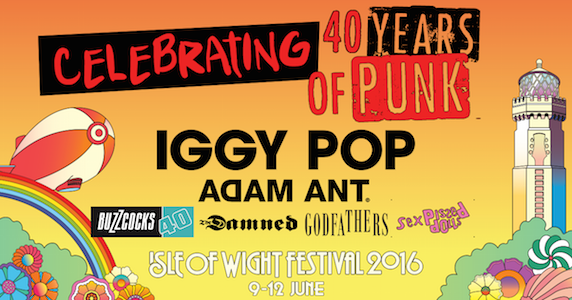 Punk turns 40 next year, and in celebration of four decades of this exciting and at times controversial music scene, The Isle of Wight Festival, the first major festival of the summer, today adds Iggy Pop, Adam Ant, The Damned, Buzzcocks, The Godfathers and The Sex Pissed Dolls to what is an already incredible line up for 2016. The six new acts will all joinQueen + Adam Lambert, Stereophonics and Faithless to perform over the weekend of 9th-12th June in Seaclose Park, Newport.

1976 is widely seen as the year that punk was born. The Sex Pistols signed to EMI Records, and started to generate significant press coverage – not least for their infamous interview in December of that year with Bill Grundy. The Ramones released their debut album in 1976, and the year saw the formation of not only The Damned and The Buzzcocks, but also other punk legends and luminaries such as The Clash, The Slits, X-Ray Spex, Black Flag and The Adverts.

Commonly acknowledged as one of the most dynamic stage performers of all time, Iggy Pop will appear on the Main Stage after successfully touring the globe with The Stooges for the last decade. His iconic solo albums such as ‘Lust For Life’, ‘The Idiot’ and ‘New Values’ have produced anthemic sounds such as ‘The Passenger’ whilst cementing his place in punk rock history.

Gothic rockers The Damned, celebrating their own 40th anniversary as punk rock pioneers, will entertain fans with their showmanship and humour, performing tracks from their extensive back catalogue including ‘Eloise’ which reached the top five in the UK Charts in 1986.

Buzzcocks will also celebrate 40 years as a band, bringing their razor sharp riffs to the Isle of Wight. The band are heralded as one of the most important influences on the Manchester music scene, as well as the independent record label movement. Founding members Pete Shelley and Steve Diggle will perform timeless tracks such as ‘What Do I Get’ and ‘Ever Fallen In Love (With Someone You Shouldn’t’ve)’ with a rhythm section consisting of Chris Remmington and Danny Farrant.

Legendary rock and roll band The Godfathers consisting of brothers Peter Coyne and Chris Coyne earned a reputation for their electrifying brand of primal rock and roll and incidenary live shows around the world. In 2013 the band returned with the much-anticipated release of their brand new album ‘Jukebox Fury’ after reforming in 2008 for the re-issue of their seminal debut album ‘Hit by Hit’.

Five-piece all girl band The Sex Pissed Dolls burst onto the scene in 2014 and have quickly amassed a committed following playing Punk, Ska and Dirty Rock music. Having completed a tour this year playing songs by The Jam, The Clash, Nirvana and The Specials they will pay tribute to the anniversary of the Sex Pistols signing to EMI records 40 years ago at The Isle of Wight Festival.

More acts will be announced at a later date – watch this space!

A full range of ticket, travel and camping / accommodation options are available for The Isle of Wight Festival from www.isleofwightfestival.com.

– Eve’s Tipis – Try something different and stay in a tipi, plus enjoy cocktails or champagne from the bar or some hot breakfast options to start your day right

– Love Your Tent – enjoy an ethical camping experience plus hot showers and a Poodle Parlour!

– Pink Moon Camping – Choose from a colourful collection of accommodation and enjoy your weekend with a unique camping experience!

Travel:
A variety of travel options including ferry, speed boats, river crossing, Big Green Coach Company and National Rail can be viewed on the festival’s website.