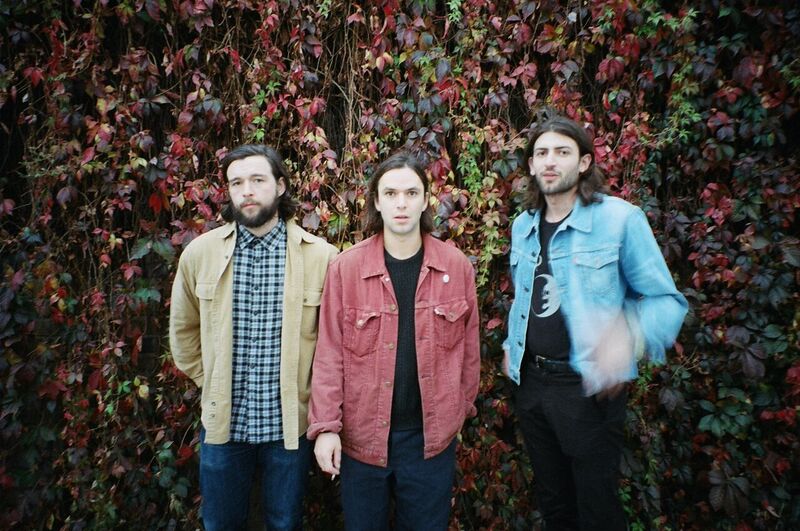 Virgin Kids play frenetically energised rock‘n’roll that draws from sources such as post-punk and the “70s West Coast.

The band has been rigorously playing shows throughout the UK, supporting a number of influential garage artists including; Jacuzzi Boys, The Coathangers, Dirty Fences, and Kim and The Created. The production on their debutGreasewheel wisely emphasises the fevered intensity of Virgin Kids’ live show.

Opener ‘Bruised Knees’ sets out the record’s punch-drunk mix of Gun Club swagger and the Descendants’ more jovial insurrection with its tightly strummed scuzzy guitar riff pitched somewhere between punk and surf-rock and a bear-hug of a chorus that sounds as if it is being bellowed with beery gusto down a scrappy tube of cardboard by frontman Asher Preston.

The vocal hooks come fast on Greasewheel, delivered with a roguish, self-assured charm. Amongst the scrappy swagger of highlight ‘Cracks In A Colour’ there’s thrilling evidence of compelling, thoughtful craftsmanship as well.

Sixth track ‘Shrink’ offers an emotional breather from the rumbling garage-punk with its slightly sozzled, acoustic angle in a move reminiscent of the Gun Club.

On ‘My Alone’ the band perfectly nail the pint-hoisting romanticism of fresh-faced pals forming a gang and striking out against the world. The track also exemplifies how Virgin Kids perfectly embody that classic Burger Records mix of scuzz and raw charm and Greasewheel will sit comfortably alongside releases from label mates such as Hinds and the Sarcastic Assholes. Meanwhile in the UK – Fluffer Records, the visceral London based DIY label that not only bought us a host of unforgettable live music nights featuring the likes of Slaves, God Damn, Cerebral Balzy and Bad For Lazarus, but are also responsible for recorded outputs of garage-punk duo Love Buzzard and Grimsby stoner-rockers Sewer Rats – mean there are two extremely renowned and passionate labels involved.

Throughout Greasewheel the band veer from sounds that evoke FIDLAR and Black Lips (‘Crook’) to a poppier take on the Germs (the gleefully brash ‘Never Nude’) and the Misfits (the gothic, swirling psych-garage revelry of ‘Shrink Wrap’)

While there’s a definite lineage and history here, the trio’s debut is about today- capturing the jubilant highs and all-encompassing, nightmarish lows of young life in the most enlivening and bracing way.

ESTRONS’ incredible EP Whoever She Was… is out now!