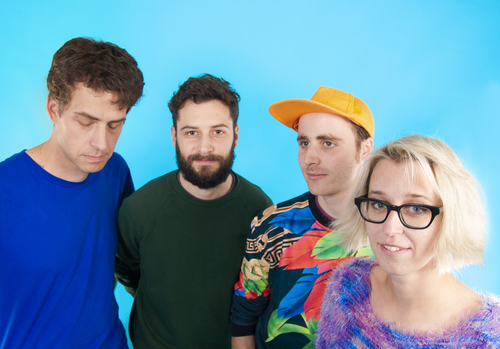 CHORUSGIRL
Reveal New Video For “Dream On Baby Blue” Directed by Christina Hardinge
Debut Album Out Now Via Fortuna POP!
6th Jan: The Fortuna Pop! Winter Sprinter, The Lexington, London (w Flowers & Tigercats)
“This record is unfailing in its approach to perfect pop.” The Line of Best Fit
“There’s no slack on the album – from the starting gate to the finish line, Chorusgirl bristle with static and nerves.” Drowned in Sound
“One of the most impressive first albums of a year rich in strong debuts.” Narc 5/5
“The best album I’ve heard this year.” Soundblab 10/10
“A remarkably skilful quartet.” Music OMH
“Sparkling with bright rhythms and jangling pop… with hints of something shadier, bittersweet and more potent.” London in Stereo
Following the release of their acclaimed eponymous debut album on Fortuna POP!, Chorusgirl reveal the video for their latest single “Dream On Baby Blue”. Directed by Christina Hardinge, the clip was shot on Super 8 – coinciding with the format’s 50th anniversary this year.  A nod to The Slit’s “Typical Girls” video directed by Don Letts, the video was filmed at a bandstand in Victoria Park.
More about the video by director Christina Hardinge:
Shot on a spontaneous Sunday morning on Super 8 film by award winning filmmaker Christina Hardinge (Bad Baby Productions), the ‘Dream On Baby Blue’ music video captures Chorusgirl performing live at Victoria Fountain in East London’s Victoria Park.

The video was originally intended to be filmed at a bandstand in Victoria Park, as a nod to Don Lett’s Super 8 music video for Typical Girls by The Slits which features a live performance in a bandstand.

However, the Chorusgirl video was swiftly relocated on arrival after being told to ‘jog on’ by an unexpected group of pumped men occupying the Victoria Park bandstand to practise their boxing skills at 8am.

Luckily, the nearest next point of interest was a good one. With it’s raised granite platforms, sculpted cherubs, pink marble, gothic arches and mirror pools, the Victoria Fountain (built in 1862 by wealthy philanthropist Angela Burdett-Courts as a gift to poverty stricken East London) makes quite the stage.

The live performance attracted a host of passers by, who stopped to enjoy the show. Children and dogs appeared to enjoy it especially.

Dream On Baby Blue is the first of three videos Christina ‘Bad Baby’ Hardinge is producing for the band. The next, No Moon, is filmed on Super 8 at Carters Steam Fair and will be released in January 2016.​

​​Both videos coincide with the 50th birthday of Super 8 film, celebrating 50 years since Kodak launched the format in 1965.

Chorusgirl’s thrilling eponymous debut album came out on13 November via Fortuna POP!  The new single “Dream on Baby Blue” was described by songwriter Silvi Wersing explains as being; “mostly about feeling powerless and small and the demands that others make on you to speak up, but that there can also be beauty and dignity in silence if you just stay who you are.” The band hit the road this week with shows in Sheffield and Leeds, with further dates in December and then playing at London’s Winter Sprinter at The Lexington on Wednesday 6 January.

Formed in London, Chorusgirl is the brainchild of German songwriter, singer and rhythm guitarist Silvi Wersing. Blending the shimmering dreaminess of 4AD bands like Lush, the noir pop of The Cure and the bittersweet electricity of The Breeders, the ten songs on the album sparkle with melody and pop nous but are stealthily subverted by something darker.

After several years playing in bands that either split up or fizzled out, fed up with being someone else’s bassist and feeling like the eternal chorus girl to other people’s dreams, Silvi Wersing decided to strike out on her own. Naming her own band with a heavy dose of irony, she recruited Udo Westhoff (bass), Michael Boyle (drums) and Diogo Oliveira (lead guitar) to flesh out the demos she had made on her laptop, polishing the recordings to a hi-fi sheen in Bear Cave Studios in Cologne.

Dig beneath the surface of the perfect pop songs on Chorusgirl and you’ll find heavy lyrics about saying goodbye, giving up, grief, alienation and loneliness. It’s all deliberately coded though, shrouded in the metaphysical poetry that Silvi does so well. As she explains, “Most things in life are complex, so lyrics should be too. I like subversion and the non-obvious. Like the best kind of horror films.”