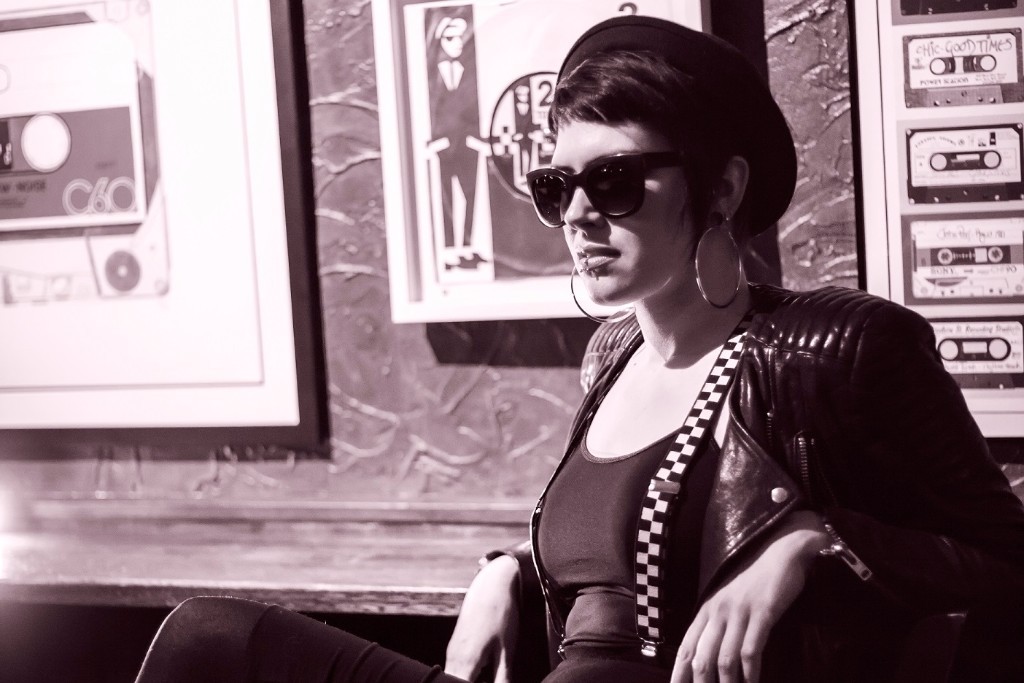 “If you see her name on gig flyers around the UK, go and check her out … She’s a great artist, and one to watch” – Matt Stocks,  “The Punk Show” Team Rock Radio

“This girl’s really got something going for her.  Be sure to see her everywhere in the not-too-distant future” – Get Mentioned
“Slick social commentary and a healthy dose of biting punk attitude makes Millie Manders’ off-kilter pop all the more beguiling.” – Louder Than War
“impressive soulful vocals, breathtaking instrumental performances, and relatable lyrics” – Niji Magazine
Millie Manders is an off the wall, off the chart, ballsy singer-songwriter from South London, who brings a party-hard mix of ska, pop and punk-rock to the stage.  Blending socially conscious lyricism and carnival-esque beats with Riot Girl attitude, Millie and the band’s slick delivery and captivating stage performance is rapidly grabbing attention.
Commenting on the video, she says, “Working on ‘Teddy’ with Insurgent Films and Dark Pixels was an incredible experience, as was filming at the Electrowerkz in Angel. I feel incredibly lucky to have worked with such an experienced team, and I can’t wait for everyone to see the result…”
Now, with her new PledgeMusic funded EP, ‘Obsession Transgression’ set for release on 20th November 2015, she’s about to make her first big steps onto the national circuit.
Millie’s music is clearly eclectic and this is a fact she happily celebrates; “I like to think my music is full of energy and dexterity – a colourful clash of genres incorporating everything from rock and soul to ska and folk. I draw inspiration from many different artists; James Brown, Aretha Franklin, Skunk Anansie, Pink, The Who, Rolling Stones, The Specials and The Ramones being a few of my favourites. I was brought up listening to classical, theatre, rock, rhythm and blues, hip hop and more because my parents are both music lovers so it all plays a part in the way I write.”
Millie started her musical journey at just five years old, experimenting with the piano, and going on to pass grade five on the clarinet at 11, adding alto and soprano saxophone to her repertoire, until at 16 she chose her voice as her main instrument and received vocal coaching from Richard Charlton (Ed Sheeran, Jason Perry, Leanne Mitchell). Since this time Millie has been in various bands, developing her vocal and song writing skills in new ways and emerging as a solo singer-songwriter in 2012.
The last three years have seen Millie grow a substantial fan base across the UK, touring consistently and releasing two EP’s.  Millie is constantly reaching out to her fan-base and her non-stop work ethic has cemented her reputation as a hardworking and recognisable force. Millie’s work has been exploding in all directions – radio shows, magazines, new recordings, gigs all over the UK and her first show in Paris in November 2014. Several online radio stations such as Shoreditch, Croydon, London Unsigned, Krystal and Blast Radio have interviewed her, featured her music and used her to co-host shows. BBC Norfolk featured her track ‘Raw’ on their show hosted by Sophie Little and more recently Millie was invited to ‘The Punk Show’ on Team Rock Radio to be interviewed by Matt Stocks and play a live session.
2014 saw Millie playing at several festivals across the UK including BoomTown with The Snare, Upton Fab Festival in Worcester, Rhondda Rocks in Wales, the Greater Manchester Fringe Festival, Angel Fest and Two Counties Festival in Kent as well as K-Fest in Lowestoft.  She also performed alongside Leo Ihenacho, Lemar and Jahmene Douglas at London Rocks, and has been asked back to sing again at this year’s event.
Since then Millie has played Scroobius Pip’s club night ‘We.Are.Lizards” at Proud in Camden, “Matt Horne Presents” with Bloc Party at The Queen Of Hoxton and was personally asked to support Bleach Blood (Jamie Jazz – King Blues) at their Christmas show in Camden at the end of 2014.
2015 has been a busy year on the road for Millie Manders. Having already hit up every corner of the UK, including festival appearances at Tramlines Festival in Sheffield, The Great Escape Festival in Brighton, Paintopia Bodyart Festival in Norfolk and The Kaya Weekender in Wales. Millie will be back on the road at the end of the year, in support of ‘Obsession Transgression’.

Obsession Transgression is available on CD and Digital Download from 20th November 2015.