Everything Must Go’ 20th Anniversary Show

Following a series of phenomenal anniversary shows for ‘The Holy Bible’ and the universal critical success of their twelfth studio album (2014’s ‘Futurology’), Manic Street Preachers announce their biggest Welsh headline show since their sell out gig at Cardiff’s Millennium Stadium in 1999.

The band will play Swansea’s Liberty Stadium on Saturday 28th May 2016 – a twentieth anniversary performance of their hugely successful fourth album ‘Everything Must Go’.

Manic Street Preachers will perform two sets at the stadium. The first half sees the band perform ‘Everything Must Go’ in full, the second promises rarities and curios, greatest hits and a few brand new songs.  The band are currently collaborating with BAFTA winning director Kieran Evans (Kelly + Victor, Nowhere is Home) who they worked with on videos for their last two albums in order to create an entirely new visual backdrop for the show based around the album’s iconic artwork. The gig promises to showcase two eras of Manic Street Preachers at their creative peak – then and now.

Very special guests at the Liberty Stadium will be the mighty Super Furry Animals. One of Wales’ most consistently inventive rock’n’roll bands, the Super Furries were regular touring mates of the Manics on many of the original Everything Must Go live shows (they also supported on the Millennium Eve gig).   Public Service Broadcasting, who have also played previously with the band will appear, DJs will be announced soon and details of other celebrations of the anniversary.

Originally released in spring 1996, ‘Everything Must Go’ was the band’s first massive commercial success. The record was certified triple platinum in the UK and went on to sell over a million copies and bag multiple Brit awards. It features four top ten singles (‘A Design for Life’, ‘Everything Must Go’, ‘Kevin Carter’ and ‘Australia’). Touring the record, the band played an early show in the tiny basement bar of the Haçienda to headlining to 20,000 people at Manchester’s Nynex Arena in less than twelve months.  Although some songs from ‘Everything Must Go’ are still cornerstones of Manic Street Preachers gigs, several of the album tracks haven’t been played live since ’96. 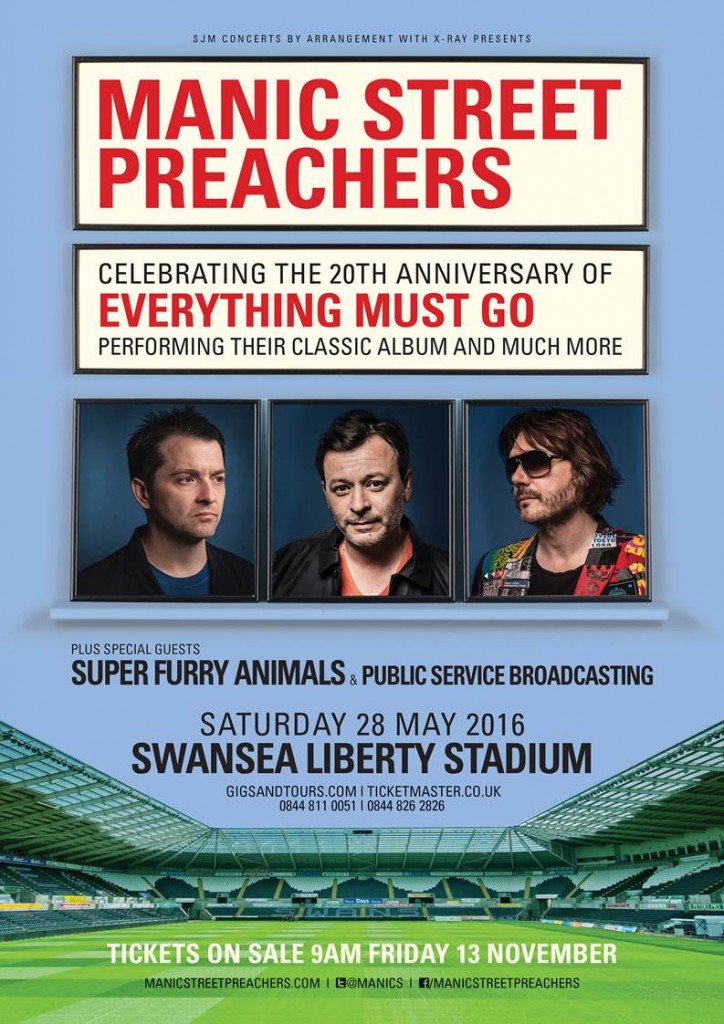