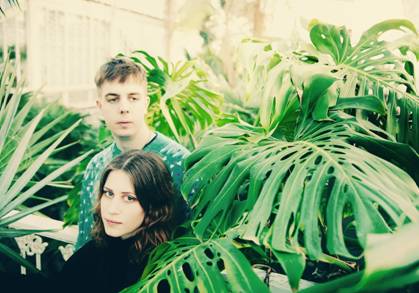 “Listen to “Under” and the gentle warmth of the production may remind you of M83. The wispily humming vocals may bring to mind the delicate sadness of The XX. Some of the light, bouncy drops may remind you of Kygo, even. Despite the clear references, “Under” still stands on its own as a piece of music that slowly but surely simmers and coaxes out your emotions.” –NOISEY

“And none of that emotion seems to be missing from ‘Under’, all of it fading in, and then out, with a nebulous all-encompassing feeling, gradually surrounding and enveloping you.” – The 405

“At first I thought that Heart/Dancer was just a name that was rather difficult to Google, but it seems that this Swedish act are just so bloomin’ fresh and new that there’s not too much of a back story to give you… and that makes them a very exciting, and unknown, prospect.” – Jajaja Music

Heart/Dancer are a dream electronica pop act duo, hailing from Stockholm, Sweden. Having recently come back from a UKand European Tour, as well as having their music synced to Swedish blockbusters and American TV series, Linnéa Atieno and Joakim Buddee are now ready to release their upcoming new single Under.

Under has a very imaginative and airy sound which resembles bits of Kygo, bits of Young Galaxy, but above all is the perfect gift for all the M83 fans. Such blissful musical brilliance is given to us in the shape of a laid-back tune that blends dream pop, shoegaze and new wave with the current trend of tropical electro pop.

Under is an impressive feast for everyone including even the most reserved and precarious darlings.

The combination of joyful electronic riffs and M83-like soundscapes, Atieno’s mesmerising vocals in the style of Of Monsters and Men’s Nanna Bryndís Hilmarsdóttir, and Buddee’s gentle tone with a hint of José González that just warms your soul.

In a recent interview with Poule d’Or, the duo were asked about what inspired their music:   “Mostly it’s about strong emotions that we want to translate to music. A lot of times we’re inspired of other people’s songs, we listen a lot to all sorts of music. But that’s emotions too, everything is carrying some sort of feeling. It’s all about finding the right ones and expressing that in the right way.”

Heart/Dancer are worthy of any pop-culture savant’s undivided attention, and both

Under and their forth-coming LP My Heart Is A Dancer, will be out on 27th November 2015.