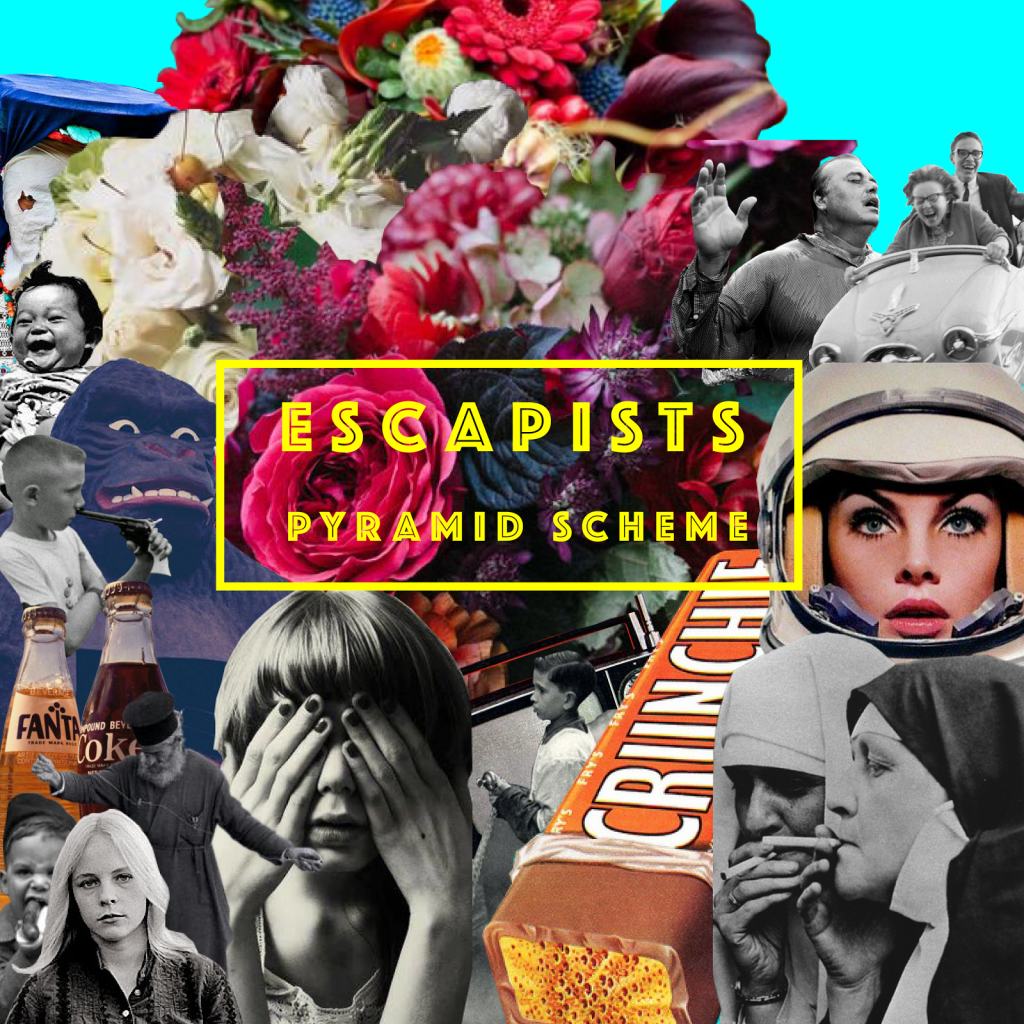 “Funeral and thoughtful lyrics echo early Arcade Fire, but there’s an undeniable pop sensibility to their music, with catchy choruses adding a lacquered sheen to their harmonies. Impressive” – The Telegraph

Displaying all the intensely melodic power riffs, bold rhythmic interplay and colossal chorus hooks that we’ve come to expect from London’s most thrilling indie rock foursome, ‘Pyramid Scheme’ also marks out its own space with its distinctively visceral momentum. On this third single from Escapists’ in 2015, high-pitched vocal harmonies spar with sparks of pealing guitar before crescendoing to a heady climax. Simon Glancy’s lyrics stem from a childhood disillusionment with the rigmarole of Sunday church worship: “to me it felt like a pyramid scheme, where you get in at the bottom and hope you’re not the last.” ‘Pyramid Scheme’ is a self contained four minutes of paranoid protean beats and intricate verses which perfectly articulate the schism between archaic beliefs and Generation Y discontent. ‘Restless’, ‘euphoric’ and ‘impassioned’ are just three words that almost do it justice. The reality is that Escapists are one of the most thrillingly conscious rock and roll bands to emerge from London in a while.

When Escapists’ vocalist Simon Glancy moved to London to concentrate on his songwriting, he asked the only musical friend he knew to help record his ideas. Enter Oli Court, future Escapists guitarist. Oli drafted in his friend, composer Max Perryment, to play bass and the trio spent a week of intensive sessions finalising Glancy’s ideas before deciding their musical camaraderie was worth pursuing. Oli’s former schoolmate Andy Walsh was enlisted to round off the lineup on drums and before long they were recording indie rock inspired by Simon and Oli’s university listening habits: Arcade Fire, The National and Broken Social Scene.

Escapists’ debut single was picked up and broadcast by XFM’s John Kennedy and within the year they toured with Imagine Dragons and made their festival debut at Reading and Leeds. Their debut album ‘Only Bodies’ was written in the first half of 2013 and released in 2014 to general appraisal from the blogosphere. Towards the end of last year they followed it up with the standalone single ‘Faraday Cage’, packaged with a striking update of the Talking Heads classic ‘This Must Be The Place’ – it was a fitting homage to a band who, like Escapists, were bent on pushing the parameters of new wave. This year Escapists remain true grafters and their all-killer five-track EP, ‘Eat You Alive’ is evidence of a band who have morphed into thought-provoking post-punk powerhouses bent on indie disco domination.