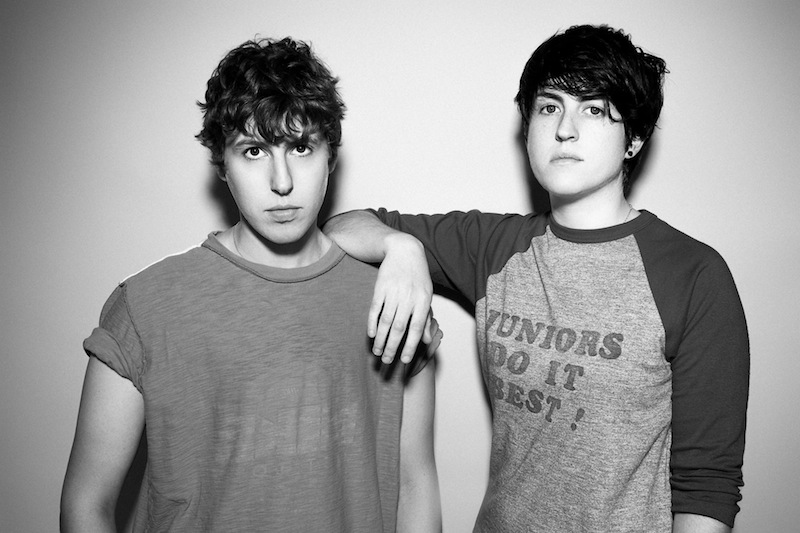 In anticipation of their forthcoming EP, which is due Nov 6th via Lost Map Records, Scotland’s Tuff Love have shared another slice of their dreamy guitar pop with new track ‘Carbon’. The band are set to tour the UK in full  this November.

One half of Tuff Love, Julie (guitars, vocals) went on to shed some light on the new track as she said“This song was originally called ‘Fuck Trolley’. I think it fit much better, and have not yet managed to adjust to the new name. Maybe ‘Fuck Trolley’ sounds abrasive or bad or hard, but to me it sounds very gentle and silvery. I think the song is about different kinds of family and the things that can tie us together.”

The follow-up to the critically-acclaimed, sold-out and for the foreseeable future digitally deleted EPs Junk (“the makings of a very special band” – DIY Mag) and Dross (“they’re a hell of a prospect” – The Skinny) as well as the Record Store Day  7” single ‘Groucho’ (“a windstorm of fuzzed-out, sun-bleached exuberance” – Line of Best Fit), Dregs is proceeded by the track ‘Duke’, which impacts on October 23. Tuff Love will embark on a UK and European tour throughout November that includes a date at the Iceland Airwaves Festival – see dates above.

Tuff Love are Julie Eisenstein (guitar, vocals) and Suse Bear (bass, vocals) plus live drummer Iain Stewart (also a member of The Phantom Band). They come from Glasgow and they write dazzling, sun-streaked guitar pop songs with mesmerising lyrics, heart-wrenching vocals and dreamy melodies like the sound of pure summer. They make all their music in Suse’s flat, self-engineering and self-producing everything. Dregs is the latest, most confident-sounding and most compelling product of their increasingly sophisticated homespun craft – lo-fi in ethic but not in sound. From the distorted jangle of ‘Duke’, through the snapping ‘Crocodile’ with its wonderfully wonky outro organ solo and on to the woozily waltzing ‘Carbon’, Dregs is solid gold irresistible listening from first to last.

Praise for Tuff Love so far:

“A band to fall in love with” – The Guardian
“The makings of a very special band” – DIY
“Fuzzed out, sun-bleached exuberance” – The Line of Best Fit
“Depth and substance… they’re a hell of a prospect” – The Skinny
“A little bit of magic” – Gold Flake Paint
“Devastatingly cool” – GQ
“Seductively raw indie pop that hooks you instantly” – The Sun
“Love the sound that they’re making” Nemone, BBC 6 Music
“Each song is a fuzzy indie-pop classic” – The Scotsman
“Great college rock” – NME
“They’re headed for the big time” – Metro
“Deranged, stuttering alt rock with a heart of gold” – Clash
“Perfect pop music” – Vic Galloway, BBC Radio Scotland