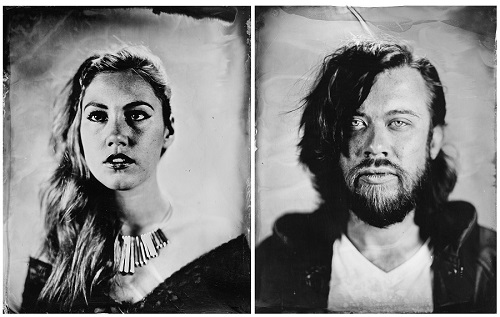 Following the success of their debut single ‘At Midnight’, Australian electro-pop duo S L O W announce the release of their eponymous EP on 23rd October.
Hailing from the historic capital of Hobart on the rugged island of Tasmania, Cal Young and Calypso Brown are already making serious waves in the Australian blogosphere, garnering support from the likes of Casual Band Blogger and Acid Stag, and are now set to bring their fresh brand of blissed-out pop to UK shores.

The EP opens with new single ‘Washed Out Fantasy’, a hypnotic track brimming with pulsating synths and Calypso’s mesmerizing vocals. According to S L O W, the lyrics reference “the power that each person has to perceive the world around them in a certain way and, through doing this, shape a unique reality. In life you grow and change constantly, the present becomes the past; memories become dreamlike and the world surges on barely allowing for breath. It is easy to escape into the fantasies of our own minds; the real challenge is to not sink too far in but instead find the strength to carry on swimming.”

Their glossy signature sound is further demonstrated in ‘At Midnight’, a catchy and layered synth pop gem that showcases Calypso’s velvety tones to perfection, and  recently  featured in Elie Saab’s Autumn/Winter fashion show in Paris.

Despite only forming a few months ago, S L O W are not without an extensive history. A producer for over 10 years, Cal’s first project The Scientists Of Modern Music gained him notoriety across Australia for playing a slew of live shows, including Falls Festival, Pyramid Rock and Golden Plains, and for releasing a number of successful EPs. His work with singer/songwriter Asta on her track ‘My Heart Is On Fire’ subsequently won the much coveted Triple J Unearthed High competition, as well as gaining a number 50 spot on Triple J’s Hottest 100. Whilst writing and touring with Asta, Cal went on to create his solo project KOWL, with the single ‘Who Am I’ from his self-titled debut EP listing at number 3 on Hillydilly’s top 25 Australian singles for 2013.

Having spent the last few years developing her style, recently turning to electronic and experimental sound worlds, singer/songwriter Calypso originally joined the tight community of live performers in Edinburgh after spending time in the city, touted as a talent to watch and performing at the Edinburgh Festival to excellent reviews.  After teaming up with Cal to produce her debut EP, their collaborative synergy has gradually given birth to S L O W.

What began as a possible throwaway project, S L O W has grown into a new and exciting endeavour, resulting in a polished debut EP that retains elements of traditional songwriting and storytelling, but with a fresh, original edge.

Telekinesis shares video for “Cut The Quick” from forthcoming album, out 22nd February on Merge