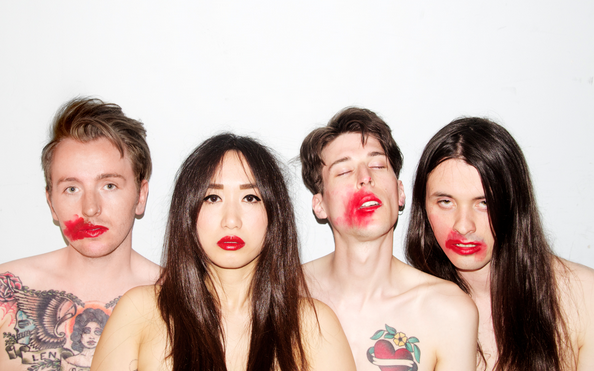 Ahead of their support tour with Girl Band next month, London’s PROM reveal the stark new music video for ‘Touch Me’, the explosive first cut taken from their forthcoming AA-side 7” due October 23rd.

The video was part inspired by Nine Inch Nails’ ‘March of The Pigs’, a more chaotic spin on a performance video. Guitars are thrown away, equipment falls over, people fall over.

Emerging from the sleazier back alleys of punk and noise in late 2014 with their unhinged debut video ‘Cry Baby Cry’, PROM self-released their debut 7” murder ballad ‘Celebrate’ / ‘Cry Baby Cry’ to acclaim from the likes of NME, DIY, XFM, BBC Radio 1 and 6 Music earlier this year. Having recently laid their clashing industrial tones to tape in an X-posure session with XFM’s John Kennedy, the four-piece will join Girl Band this coming October and November on the UK tour dates below.

‘Touch Me’ / ‘I’ll Teach You’ was produced by Rory Attwell of Brattwell recordings. Pre-order the 7” now at promshop.bigcartel.com