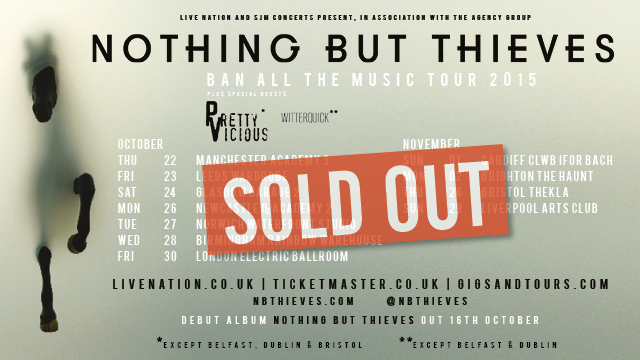 Nothing But Thieves have released their impressive self-titled debut album today via RCA Victor, featuring singles ‘Wake Up Call’, ‘Trip Switch’, ‘Ban All The Music’ and ‘Graveyard Whistling’. This coincides with the news that the whole of their forthcoming headline tour is now sold out. The dates kick off next week, following a series of in-store appearances across the country. Nothing But Thieves have also been added to the line-up of Community London, as well as a special Radio X X-Posure show in London, both of which will take place early next month.

With recent releases off the album gaining multiple playlist additions across Radio X, Kerrang! and Radio 1 – where the band also bagged Hottest Record In The World and Track Of The Day accolades, as well as playing as part of their Live Lounge Month in September, things have really moved up a gear from their early days writing in Guitarist Dom Craik’s Southend garage. Nothing But Thieves have spent this year traversing the globe, playing a multitude of international festivals, including Summersonic in Japan and the main support slot at Muse’s Rock In Rome show to a sold out stadium of over 35,000 fans, as well as Reading and Leeds Festivals. And now they’re set to embark on their own, fully sold-out headline tour of the UK.

It is fair to say Conor Mason (vocals), Joe Langridge-Brown (Guitars), Dom Craik (guitars), Philip Blake (bass) and James Price (drums) form a definitive and unique sound. At once thunderous yet delicate, raw yet methodical, they evoke the profound dynamics of music’s more creative imaginations. Dom’s electronic “noodling”, Conor’s “old school” rocking, and Joe’s forays into “Riff Central” fused to form “a weird monster,” which the band grabbed by the tail and rode as it thrashed. As Joe shaped lyrics from the melodies the songs dictated, the definitive Nothing But Thieves sound began to take shape and together with producer Julian Emery (Lissie) their album was born.

Recorded between Angelic Studios, Little Drummer Boy and Hits & Arts Studios and mixed by Cenzo Townshend (Maccabees,U2, Florence & The Machine, Thirty Seconds To Mars) and Adam Noble (Placebo, Don Broco, Kids In Glass Houses), The album will undoubtedly take the band to the next level. They’ve always had the songs, now they have the platform.