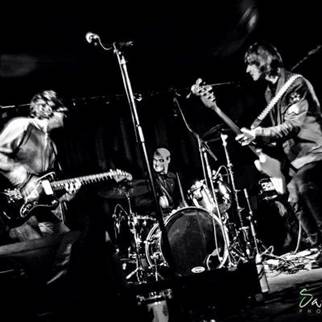 Single ‘Pentagrams/Skeletons in the Florist’

Watch the video for ‘Pentagrams’ HERE

“This is a trip – a total trip. The three piece band is beyond.” – John Robb (Louder than War)

Psych-rock trio Déjà Vega burst out of the shadows with two spine-rattling tracks ‘Pentagrams’ & ‘Skeletons in the Florist’. The band consist of vocalist and guitarist Jack Fearon, drummer Tom Webster and bassist Michael Newton. After forming in Cheshire, Déjà Vega made the short journey to Manchester, a fitting backdrop to their gritty, guitar led psychedelia, with its red-brick and cobbled streets. Both tracks were recorded by Steve Powell (The Stairs, John Power, Michael Head & The Strands) at Liverpool’s Track Studios.

Rhythmic and rage-fuelled, ‘Pentagrams’ starts off with a glimmer of serene ambience before being dragged into mania. Fearon’s slurring lyrics lurch in and out of poetic chant, battling over chaotic drums and the razor-sharp riffs underneath. The track is a melting-pot of influence; take 60’s psychedelia, a fistful of Brit-rock attitude, the anthemic cries of celebrated indie-rock front-men and fuzzed out vintage guitars – you’ve got the raging beast that is ‘Pentagrams’.

‘Skeletons in the Florist’ is a smokier, slinkier take on Déjà Vega’s trademark sound. It opens with the thoughtful plucking of guitars accompanied by Fearon’s groans; distorted and reverbed, they writhe in and out of consciousness before exploding into a cacophony of attitude. Guitars dripping in effects claw their way out of the background as Fearon muses with his distinct North Western gristle.

‘Pentagrams’ & ‘Skeletons in the Florist’ offer two hard-hitting ventures into sweat-drenched psychedelia. Boasting surging riffs and hypnotic lyrics, Déjà Vega demonstrate that they’re a force to be reckoned with. Both tracks will be released on the 6th of November.