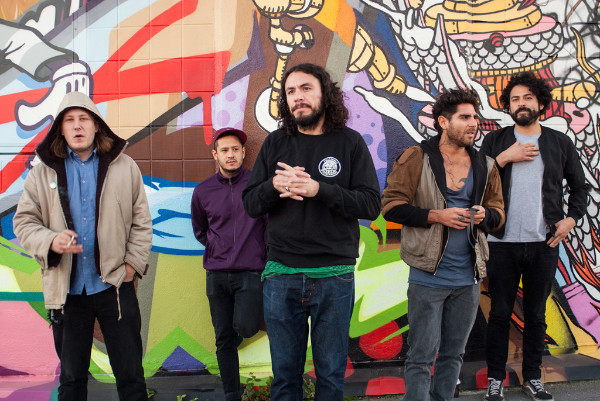 Latin psyche act Sudakistan release their long-awaiting debut Caballo Negro via PNKSLM Recordings on November 20th 2015. To celebrate their forthcoming debut, the Stockholm band are streaming the vibrant ‘Concrete Djungle’ which can be heard now via SoundCloud.

Caballo Negro exudes a confidence rarely heard in a debut album. Their unique take on psychedelic garage-punk see’s the band add a range of Latin percussion instruments to their arsenal to create an intoxicating and infectious sound that is impossible to ignore. The band have been creating waves since their first demos emerged online in 2012, with Pitchfork labelling the band “Part Thee Oh Sees, part DFA 1979”.

With four of the five band members hailing from different places in South America before settling in Stockholm, Sudakistan have a unique perspective which has allowed them to create something truly their own; perfectly balancing mayhem and song-writing prowess. A definite statement, and already something of a greatest hits, Caballo Negro gathers together re-recorded and perfected versions of Sudakistan’s previously released singles ‘El Movimiento’, ‘Dale Gas’ and ‘Rabia’, along with a set of brand new tracks. Known across Europe for their electrifying live show, the album is the sound of a band with a couple of years on their backs, secure and confident in their stride for the perfect sound.

Caballo Negro is electrifying and immediate; a thrilling introduction to a band willing to ignore the rules, with song subjects ranging from late night parties, making something out of your life you can truly be proud of, through to the rise of xenophobia in Sweden.

Caballo Negro by Sudakistan is released November 20th via PNKSLM Recordings and available to pre-order now.