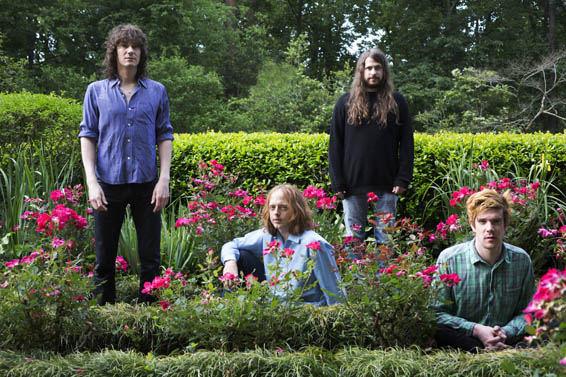 Kuroma are rapidly proving that despite the star power of each members of the band (which includes members of MGMT, The Whigs and Amazing Baby) the sum of all four of them is much, much greater than any of their individual parts.  Today they shared their cover of The Breeders’ “Divine Hammer” on Billboard who called it “a kick-ass cover… It’s the first splash, you might say.”

Listen to “Divine Hammer” on Billboard

The “Divine Hammer” cover is off Kuroma’s upcoming 20+ Centuries EP, out October 30th via Votiv Music. Not the sort of band that are content to ever sit around, Kuroma released their latest full length Kuromarama on Votiv Music in April, and spent much of the spring and summer on the road with the likes of Ex Hex, Tennis and Tame Impala.  The new EP, which features the track “20+ Centuries” from Kuromarama, includes a host of bonus material including two brand new tracks, “Divine Hammer” and a reworked version of “20+ Centuries” called “Twenty Centuries In Time” that PopMatters called “T. Rex-meets-Flaming Lips”.
Listen to “Twenty Centuries In Time”
For Kuromarama, singer/guitarist Hank Sullivant recruited bassist James Richardson, as well as guitarist Simon O’Connor and drummer Will Berman to round out the band, solidifying the line-up.  Produced by MGMT’s Ben Goldwasser between the band’s hometowns of Brooklyn, NY and Athens, GA, Kuromarama is the result of a long road, and is a fully realized record carefully designed with subtle nuances, catchy hooks, garage rock abandonment and pure unadulterated pop splendor bursting throughout. This record isn’t quite the beginning, and it certainly marks the next chapter for Kuroma, a band with a long and winding history that remains driven and persistent throughout it all. Kuromarama is spreading!

JOHN BRAMWELL (I Am Kloot) INTRODUCES ‘THE FULL HARMONIC CONVERGENCE’ | WATCH VIDEO FOR ‘I AM THE SKY’ HERE FT. GAME OF THRONES’ BEN CROMPTON