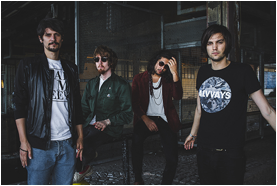 New single out on NOW

“Honeymilk sound like a smiley-faced flashback to Manchester’s La Hacienda glory days, cut through with The Strokes-like suaveness and grit.”

“With a smack-full of drums, overlayed by clasping guitars and finalised by Julian Casablancas-like vocals, their music comes together to create a qualitative sonic rock melody.”

God Is in The TV Zine

Honeymilk are a psychedelic/indie-rock act from Stockholm who have recently been gathering media attention by the likes of Q Magazine, Music Week and KEXP Radio. The band consists of Marcus, Nikki, Tomas and Erik and play a blend between The Strokes, Ty Segall, Wilco and Velvets. The Sweden-based quartet are about quality and energy alike.

After having spent countless nights on the sticky dance floors of overpriced bars in Stockholm where posturing musicians polish their image, Honeymilk have had enough! ‘Phychrocker’ started out as a protest song against the superficiality of the Swedish music scene.

Honeymilk wanted to write a song about “people with more arrogance than they merit. People with a bigger idea of themselves, than their talent can live up to,” the band says. When they had finished writing the song, they came to the conclusion – to their greatest disappointment – that they actually wrote it about no other than themselves. “Psychrocker is simply a tribute to Honeymilk.”

The sound of Honeymilk glides across the room in a smoothly flowing wave as the guitar paints colourful rainbows for the ears to enjoy. A firmly anchored bass and percussion gives the output a rolling direction of travel, whilst the vocal calmly brings the elements together as though folding a mousse together.

THE HOLD STEADY SHARE NEW SONG, “YOU DID GOOD KID”