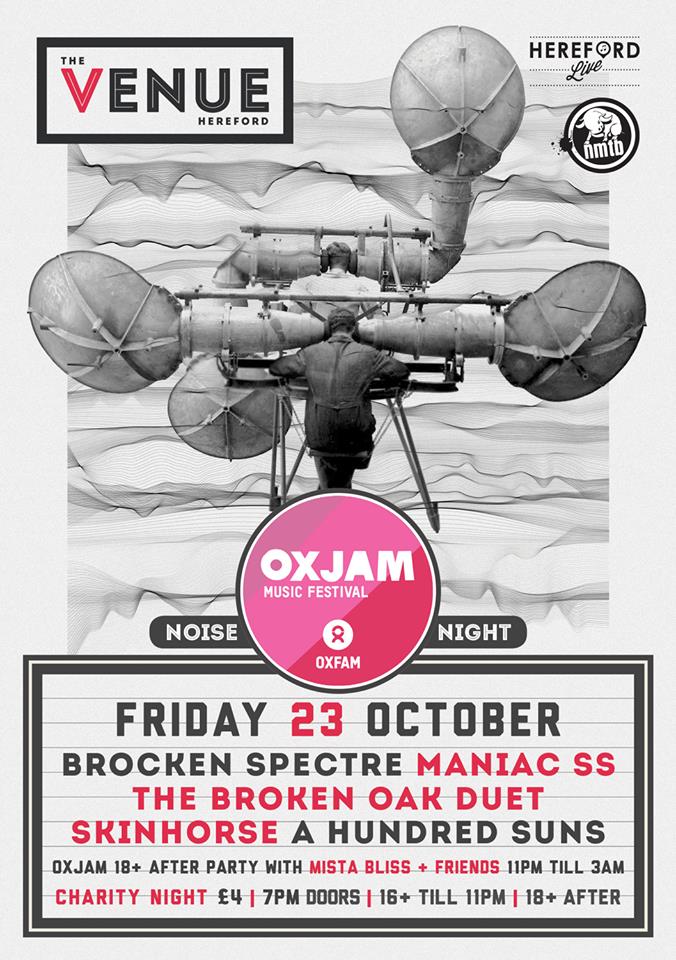 The Venue, Hereford, plays host to a night of noise on Friday 23rd October as part of the Oxfam Festival, raising money for Oxfam. The night will also be a farewell to Never Mind The Bullocks (NMTB) Promotions – it will also be the tenth anniversary of NMTB’s first ever show.

Oxjam began in 2006, with the aim of creating a network of music-loving people across the UK, all united by a shared goal – to raise money to fight poverty and suffering around the world. Despite a lot of celebrity support, at its heart Oxjam is still a grassroots festival, with thousands of volunteers celebrating music in their local communities by organising their own gigs in support of Oxfam GB.

“I joined the Hereford Live committee in order to work with like minded people, but a show like this Oxjam gig seemed a fitting farewell to NMTB promo; something that has been a big part of my life and a passion for so long,” said Brendan Stephens “I will still have a heavy involvement in live music with Hereford Live, and bands will still see me behind the camera lens as B at Gippa!”

As well as gaining the support of the performing bands, the event is also supported by local businesses The Venue Hereford, Element Audio Hire and Impact Print and Design.

From 7-11pm, entry is open to people aged 16+. From 11pm – when DJ Mista Bliss’ club night opens – entry is 18+ only. Entry costs £4 with proceeds going to Oxfam GB. For more information, visit facebook.com/HerefordLive.