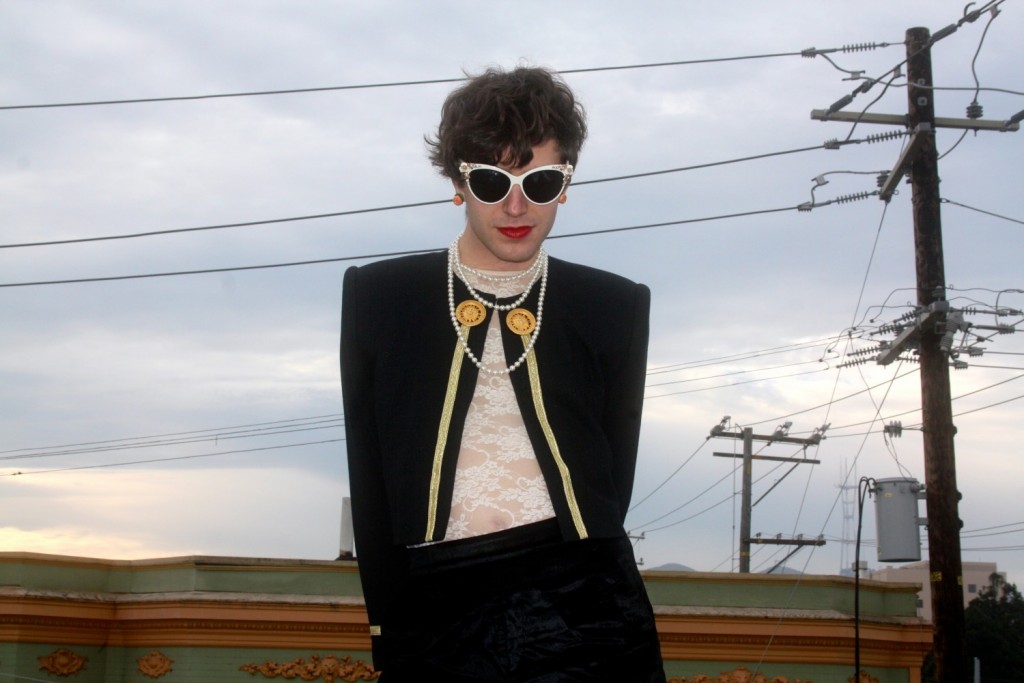 Unveils ‘Body Was Made’ Video

UK dates in November and February

Following the release of his standout LP Perpetual Motion People on Bella Union, Ezra Furman has shared the playful video for ‘Body Was Made’ on Noisey. The video sees an all-star cast featuring members of Bella Union label-mates Landshapes as well as members of Peggy Sue performing in a sort of bizarro-reality musical contest that’s brimming with humor and sass.

Director Anika Mottershaw notes: “We wanted the video to feel goofy and fun. It was fun making it with our friends, and we hope that comes across.”  This invented scenario accomplishes these aims, all the while beautifully addressing the themes of bodies and identity that Furman so poignantly raises up in his lyrics.  As Ezra explains himself: “Body Was Made is a protest song against the people and forces that would make me ashamed of my body, my gender and my sexuality. Its a declaration of freedom from false authority and self-appointed social police who have given me grief all my life.”

Perpetual Motion People, delivers a cascade of memorably bristling hooks driven by a unique splicing of timeless influences, delivered with a restless urgency and combative spirit that shines through the American’s vocals and lyrics. Having taken his time to work his way into the public consciousness, Furman’s time is unquestionably now, as he finally faces an expectant audience hungry for the next stage of his thrilling approach, on record and on stage.

The album was recorded with Furman’s current band The Boyfriends – comprising Jorgen Jorgensen (bass), Ben Joseph (keyboards, guitar), Sam Durkes (drums) and saxophonist Tim Sandusky – and recorded at Sandusky’s studio Ballistico in Furman’s home city of Chicago (he’s currently based in San Francisco). Sandusky also recorded Furman’s last two albums, The Year of No Returning and Day Of The Dog. “Tim completely understands what is, or could be, good about my songs, and how to make a record,” says Furman. “Each album we make together, we’re really getting somewhere.”

Perpetual Motion People kicks off with ‘Restless Year’, about which Consequence Of Sound described as, “a ball of energy, bouncing around genre borders with glee. There’s the rebellion of ’90s indie rock, a string of sunshine-y ’80s pop, and the snarl of ’70s punk.”

“The opening lines of my records tend to be summary statements,” says Furman. “Every year has been restless, physically and even more internally.” Hence the title Perpetual Motion People, “That’s who it was made by and that’s who it’s for. People who feel they can never settle. I’m restless in most aspects. I don’t tend to live in one place for long. I am always changing the way I present my gender. My religious life is intensely up and down in terms of observance and personal convictions. I’ve always viewed the idea of truth itself as something wobbly, always slipping out of our grasp. That’s what the songs are about: a head that is haunted, a society I cannot join, a lover who is perpetually in the act of leaving. A central idea is the fugitive or runaway, in a hideout built in the midst of an unfriendly or alienated world.

Though reluctant to single out tracks, given they’re all equally loved, Furman admits that ‘Ordinary Life’ “is a concept I’ve been trying to get out for a long time.” He cites transgender American author, playwright, performance artist and gender theorist Kate Bornstein: “She’s struggled a lot with depression and suicidal thoughts, she said, “Do anything you have to do to make your life worth living, break the law, run away from home, destroy your possessions; just don’t be mean to people”. I meet a lot of fans in need, and in pain. I feel desperate a lot too – desperate to shake people by the shoulders and try to explain something, I’m just not sure what.”

So it goes for Perpetual Motion People, besides the category of Great Albums of 2015, with its equal doses of desperation and joie de vivre, irresistible melody and boundless energy. Ultimately, Furman declares, life in perpetual motion is, “a good way to be. If you are never sure footing, you don’t get bored and the world is always new. It causes a lot of pain as well, but it seems worth it, and it is probably the only way I know how to be.”

Critical acclaim for Perpetual Motion People, out now on Bella Union:
“Perpetual Motion People is the restless sound of a genuine one-off in a generic world.”
The Guardian – 4 Stars **** (Album Of The Week)
“A work of rare honesty, beauty and exhilarating bravery.”
Sunday Times (Album Of The Week)
“Crucially, Furman’s dislocation doesn’t come out as unlistenable angst. It comes out as tunes… That’s 13 songs, with 13 nagging hooks and 13 singalong choruses; no mean feat in any genre, let alone a few.”
The Observer 4 Stars **** (Album Of The Week)
“Furman’s collage approach and his Jonathan Richman-styled variations are charming, filled with both life and with tunes… This latter day song-and-dance man is a vital force.”
Q – 4 Stars ****
“A yowling, nervy, sickeningly eloquent blend of Jonathan Richman, Woody Allen and Armistead Maupin, Furman delivers high-speed drama full of bristling riffs and frazzled joie de vivre.”
MOJO – 4 Stars ****
“His devilish smartness as a lyricist speaks loud and clear… Furman’s bug-eyed passion for old-world rock’n’roll has invited comparisons to Jonathan Richman, but his sax-heavy album blows its own horn, walking very much on the Lou Reed wild side of Bruce Springsteen.”
Uncut – 8/10
“The pied piper of restless outcasts everywhere… Perpetual Motion People is a constantly surprising and relentlessly melodic pleasure.”
NME – 8/10
“Nothing short of revelatory. Scored through with eccentricity and an unrelentingly diffuse range of influences, its easily his best full-length to date.”
Loud & Quiet – 8/10
“Like listening to The Velvet Underground on speed. Cracking stuff.”
Shortlist
“There’s a ramshackle magical confidence that tumbles throughout all the songs, a sense that Furman has created his own unique, captivating world. If there’s any justice, this could be the moment Furman becomes a star.”
DIY – 4 Stars ****

“Furman recasts his personal woes into forty minutes of endlessly fascinating creativity by throwing sixty years of popular music into a blender.”
The Line of Best Fit – 9/10

“He is self-deprecating, but his witty humour allows a glimmer of optimism. An enlightening journey through the mind of an outsider, but an entirely relatable one.”
Clash – 9/10