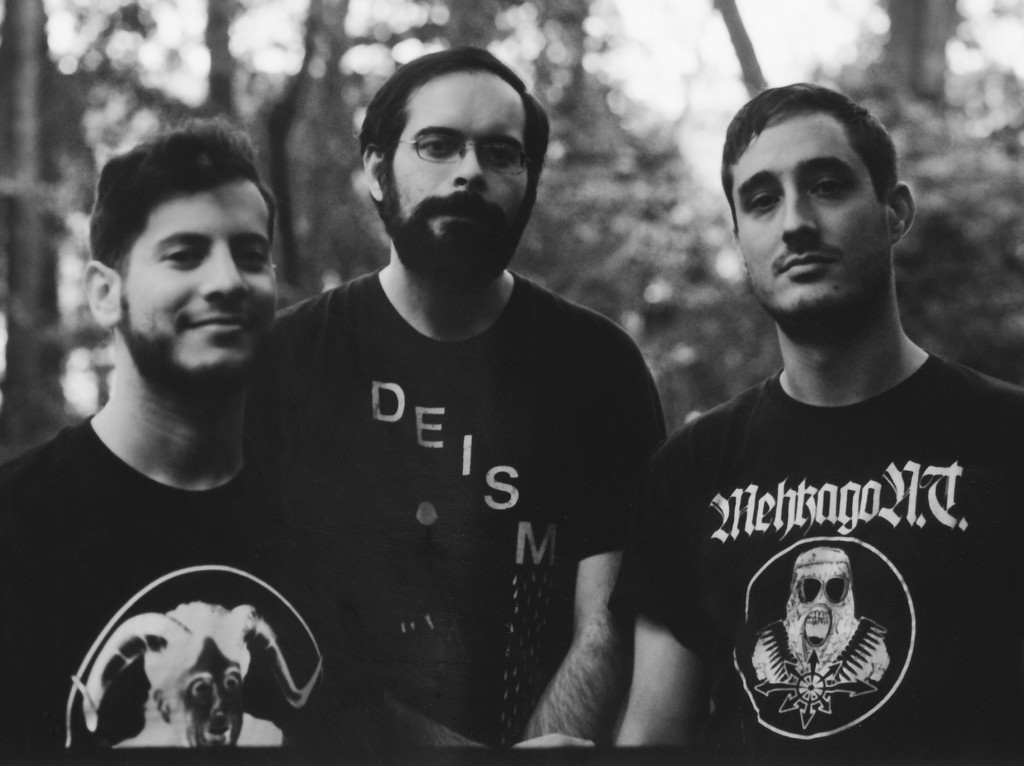 “Past Tense” Due Out Friday, October 23rd on Exploding In Sound / Hex Records

US Tour Dates Announced with Gnarwhal

Tallahassee punk trio Ex-Breathers are getting ready to release their latest full length, Past Tense on October 23rd via Exploding In Sound / Hex Records, but the wait is over. SPIN are sharing a stream of the record this week leading up to the album’s release on Friday. Past Tense finds Ex-Breathers shifting their punk influences in new directions, moving further from the hardcore of Exbx and deeper into the strange and crushing post-hardcore realm.

Comparing Past Tense to it’s predecessor, SPIN called it, “another post-hardcore combustion of bruising bass, heart-palpitating percussion, metal-denting riffs, and skin-peeling shouts and growls” before adding, “It’s as crushing and confusing as you might expect, but there’s a vibrancy and intelligence — a serpentine approach to the lead-footed drive that separates it from the hardcore scene that spawned it.”

Stereogum weighed in with their thoughts on the album as well, “This is a hardcore record, but despite the fact that these songs are acerbic and sometimes lyrically unintelligible, they all carry a weighty message.”

Addressing recent issues of hatred and ignorance, guitarist/vocalist David Settle shared the following message on the band’s social networks yesterday together with the premiere of the album:

“PS fuck Whirr. “Forced Binaries” is about (among a few other things) transphobia and the bullshit societal norms that a lot of people can’t get past to treat other humans decently. “Static Machines” is about boring, heartless punk/indie/art that doesn’t have anything new or interesting to say. Both of them apply in this situation.”

Their new record, produced by the in-demand Justin Pizzoferrato (Speedy Ortiz, Sonic Youth, Dinosaur Jr, Krill), has found the band embracing experimentation and fleshing out their ever changing sound in all directions, combining influences from Fugazi, Minutemen, Unwound, and Nomeansno into a new era of nuanced and impossibly tight post-harcore ferociousness. It’s impossible to pigeonhole the band into one tidy description. Ex-Breathers have decimated all expectations and created one of the year’s most intelligent punk records. An important album that obliterates much of society’s uglier qualities, Ex-Breathers rise above the mindlessness. All the lyrics from the record can be found HERE. Now is your change to shout along.

“Weirdo punks like Fugazi and Minutemen are still the touchstones on Ex-Breathers’ second album, Past Tense. But the laser-focused gut-punch is far more dynamic this time around, as the group sets mean riffs and a hulking rhythm section against eerie melodies.” – NPR

With nearly 250 shows played since their 2012 formation, Ex-Breathers aren’t a band to rest on their laurels. In three short years the band has self-released records and put out albums on Texas Is Funny, Community, and Hex Records. After last Fall’s double dose of the band’s blistering Exbx EP and their split with Gnarwhal, Woozy, and Ovlov, Ex-Breathers spent much of this year writing and recording, further blurring the lines between punk and hardcore. Past Tense, the band’s latest, is a bruising beast of an album, a well calculated punk record that stands among the finest. Due for a co-release between Hex and Exploding In Sound Records on October 23rd, Ex-Breathers are tearing through the walls in The Shining kind of way, splattering preconceived notions into a fine pulp.

The heart and soul of the band’s beloved Tallahassee, FL scene, Ex-Breathers have built a reputation for crushing live shows, dynamic songwriting, and an unrelenting adaptability. The sound of their upcoming album Past Tense, however, is not as easy to categorize.  According to Jack Vermillion (bass/vocals), “Our music always gets pegged as ‘hard to describe’, but we seem to be compared to Fugazi, Minutemen, and Nomeansno more often than others.” Whatever the exact subgenre may be, all 23 fast and fleeting minutes of Past Tense guarantee it will be one of the best punk records heard this year.

Produced by Justin Pizzoferrato (Speedy Ortiz, Krill, Dinosaur Jr) at Sonelab Studios in Easthampton, MA, Past Tense marks the first time Ex-Breathers have recorded in a professional studio without the band’s own David Settle (guitar/vocals) behind the boards. The album is sprawling, a chance for Ex-Breathers to explore post-hardcore through stranger realms. Booming from start to finish, there’s a punk nihilism to the record’s structure. While the album doesn’t have a specific overarching theme, the band says that “Each song we write is just a way of dealing with and understanding a certain issue” including anxiousness perpetuated by the attitudes of others, false narratives, social justice, mental health issues and the neurosis that surround them.

This is the cathartic release you’ve been waiting for. Turn it up. Give in to the carnage.

Jade Tree Signs The Spirit of the Beehive