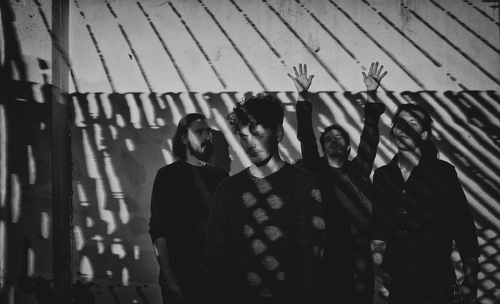 DISAPPEARS TO EMBARK ON EUROPEAN TOUR NEXT MONTH IN SUPPORT OF LATEST ALBUM IRREAL, AND UPCOMING REINTERPRETATION OF BOWIE’S LOW

Disappears shall soon embark on a European tour during November and December. The tour will see the band perform at Utrecht’s Le Guess Who Festival, before travelling through Belgium, the UK, France, Switzerland and Italy. London fans will be in for a special treat as – for one night only – Disappears will perform David Bowie’s Low in its entirety at the 100 Club. This corresponds to their upcoming live release, their reinterpretation of this classic album, upcoming on 20th November via Sonic Cathedral. You can find more information and pre-order links for this release over at the Sonic Cathedral website.  Meanwhile, the full list of dates can be viewed below…
DISAPPEARS TOUR DATES
21-Nov NL Utrecht  Le Guess Who w/ Adrian Sherwood
22-Nov BE Kortrijk  Sonic City Festival at De Kreun (curated by Viet Cong)
23-Nov UK London  100 Club performing LOW
24-Nov UK Manchester  Soup Kitchen
26-Nov FR Nantes  Pole Etudiant
27-Nov FR Dijon  deep inside
28-Nov CH Düdingen   Badbonn*
29-Nov FR Paris Boulogne Billancourt BB Mix*+
30-Nov FR Lyon Sonic Boat
1-Dec IT Milano La Sacrestia#
2-Dec IT Bologna Freak out
3-Dec IT Roma Init#
4-Dec IT Napoli TBC#
5-Dec IT Firenze Glue#
6-Dec IT Genova Altrove#
* with Tomaga
+ with Wire​
# with His Clancyness
Disappears are also touring in support of their most recent, and fifth full length Irreal released earlier this year through kranky. Another trip down the rabbit hole, the album plays out as a dream sequence – hazed dub landscapes give way to the groupʼs most experimental and open music yet. If their previous album Era confirmed the fact that Disappears are on their own trip, then Irreal is where it kicks in.

Eternalism, roboethics, identity – the album is a Ballardian mix of imperfect melodies, half thoughts and good ol’ dystopian modernity. It is a masterclass in texture, pace and control. Produced by John Congleton at famed Chicago recording institution Electrical Audio, Irreal sits in the negative space where art rock and post punk collapse onto each other. Irreal is the sound of Disappears reporting back from The Void.