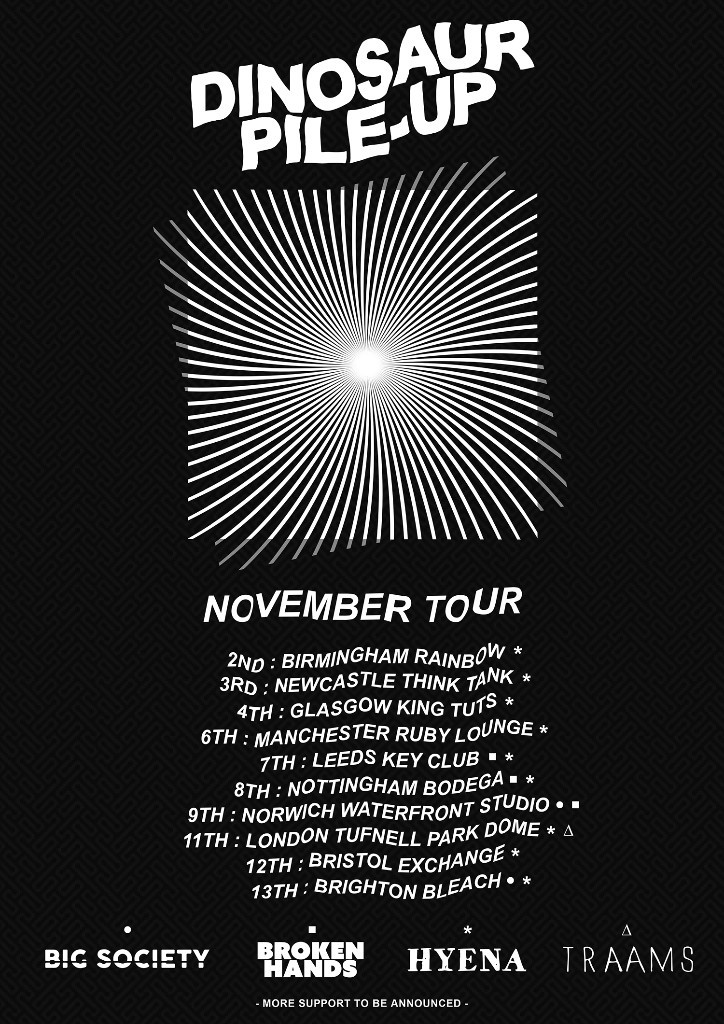 Following on from the two thunderously powerful singles Dinosaur Pile-Up have already released from forthcoming third album ‘Eleven Eleven’, they’re now streaming another brand new cut from the record in the form of ‘Red and Purple’

“Red and Purple originally started out as just the intro and a few verse chords. It was called Black Coffee for a long time because I guess I must’ve been drinking that when I wrote it,” explains vocalist / guitarist Matt Bigland. “Which means there’s a high chance that I was sat in my pants at my desk on the wrong side of some earth-shattering come down, or it was a Sunday. After it was called Black Coffee it was called Ups And Downs for a long time. We’d screw around with it in rehearsal until one time, just before tour, I busted out the riff in the middle and instantly knew it had to be on the next record. It’s about feeling weird and on the outside of everything. It’s about super bad mood swings and like you can’t fit in with everybody else. I imagined that I was crazy scrawling on the floor in red pens or some shit, and that if there was a God they would be A-OK with me being a dick sometimes. The end.”

Dinosaur Pile-Up will release ‘Eleven Eleven’ on 16th October, 2015 via SO Recordings. Featuring previous single ’11:11’ and current single ‘Grim Valentine’, which has been picking up plays across BBC Radio 1 and at BBC 6Music, the record follows a whirlwind of worldwide touring which has included The States three times, Japan twice, Europe, India and their native UK, most recently supporting Brand New. That’s a hell of an itinerary for a live show as notoriously savage as theirs. And one that’s not set to let up with the band also announcing a headline UK tour in November to follow the release of the album. Also just announced as support on the dates are Big Society, Broken Hands, Hyena and Traams (see poster for details).