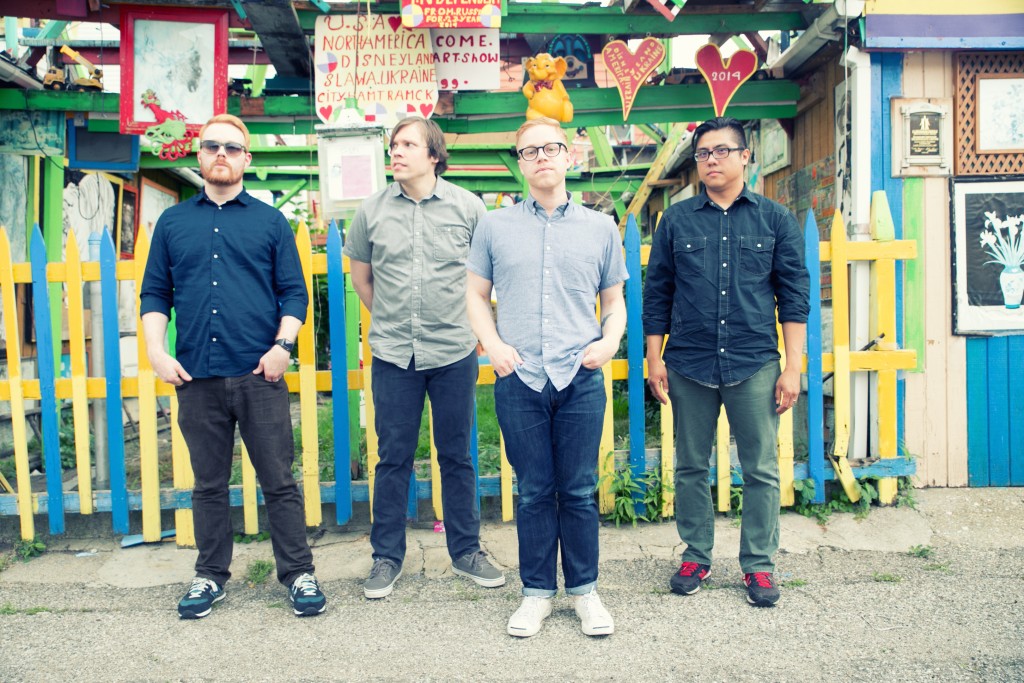 Destroy This Place Share “The Bees” Music Video on 36 Vultures

Destroy This Place and 36 Vultures have joined forces to share the exclusive premiere of “The Bees” music video, the visual accompaniment the world of beehive hairdos has been waiting for… “The Bees” is the scorching lead single from Destroy This Place’s upcoming album, Animal Rites, set for release on October 23rd via Forge Again Records (Child Bite, Old Gods, Hospital Garden). The Detroit quartet have channeled their inner Hot Snakes… albeit on a steady diet of Metallica and Michael Jackson, it’s rock and roll to the core, finding the unspoken middle ground between Soundgarden, Cheap Trick, and the Pixies, with a flare for pop-punk. The band’s wide ranging influences be damned though,Animal Rites is there own beast of big melodies and even bigger riffs, the Detroit quartet have built their ever shifting sound into delightfully accessible songs that toe the line between power pop, grunge, skate punk, and classic rock.

Speaking about the band, 36 Vultures shared, “Destroy This Place creates a fine-tuned chaos that channels influence from The Get Up Kids and ‘Through Being Cool’ era Saves The Day,” before expanding on the video, “The use of images of Old Hollywood as masks perfectly captures and reflects the chaos presented to us in the music.”

Directed by Scott Allen, the band’s go to video auteur shared his inspiration behind the clip, “When the band approached me to do the video for ‘The Bees’ I didn’t want to just do the literal thing and have a swarm of bees chasing the band or anything. Instead I decided to focus on the hairstyle. I found some cool images but still needed some animated element, so I had Ryan (Allen, guitar/vocals) record himself lip syncing it on his iPhone. I superimposed his mouth over the still images and the next thing you know I had something resembling a ‘Conan O’Brien’ sketch from the 90s. I think it’s frenetic and fun to watch and different than other videos I’ve made for DTP. I think it came out really cool.”

STREAM DESTROY THIS PLACE’S “THE BEES” VIA 36 VULTURES:
http://36vultures.net/post/131160294946/premiere-destroy-this-place-release-the-ransom

“Rock music for people who like rock music” is how Detroit natives Destroy This Place describe their upcoming third album Animal Rites. Considering their influences range from the breakneck melodicism of Zen Arcade-era Husker Du to the heavy riffing heard on early Metallica records, they seem to know their audience. Loud and aggressive yet melodic and harmonious, Animal Rites is not necessarily “power-pop” but rather POWERFUL POP MUSIC played by guys who cut their teeth on a mixture of classic rock radio, punk 45s, thrash videos on Headbangers Ball, the first wave of grunge, and mixtapes full of killer indie rock.

Destroy This Place (featuring former members of Frenchkiss Records spaz-punks Thunderbirds Are Now! and Midwest indie stalwarts New Grenada) recorded Animal Ritesin four days with the help of current loud-rock go-to guy Justin Pizzoferrato (Speedy Ortiz, Dinosaur Jr., Sonic Youth) at Sonelab Studios in Easthampton, MA. There they found lots of awesome toys to play with (including fuzz boxes, organs, and even a bass owned by both Kim Gordon and Mike Watt), and came out on the other side with 11 tracks of thick guitars (played by dual vocalists Ryan Allen and John Nelson), caterwaul drums (delivered by Sean Sommer) and booming low end (supplied by Monday Busque). They even convinced a few folks to guest on the album, including Murph from Dinosaur Jr., who played an instrument described by the band, as “Some weird percussion thing we’ll call a cowbell though it wasn’t really that at all”. In addition, they added some femininity to the boys club, and asked Kiana Saroce from Blessed State to lend backing vocals to two songs (“Doubt It!” and “When We Crashed”).

Destroy This Place might have an arena-rock sound, but they’re sticking to their punk–rooted pathos. These guys speak to what they know, all having other careers and for the most part families, asserting “Most of our songs are about the urgency of living in the moment and just being real guys with lives and jobs and responsibilities, but still wanting to feel that rush and release that playing loud rock music can give you.”

So for those about to rock, Destroy This Place salutes you with Animal Rites.

“Destroy This Place sounds like snarling, brawling bad asses but look like a bunch of upstanding suburban dudes who are just about to take the trash out on their weekly duties. This makes them disarming, especially when the thick snarls of guitars by Ryan Allen and John Nelson begin to rattle windows with Monday Busque laying it down on bass and Sean Sommer banging away on drums … There’s a pop melodicism behind the metal tinge” – The Vinyl District

“It’s a record built for arenas but adaptable to absolutely rip in the clubs.” – New Noise Magazine

“You can hear the energetic bursts throughout the just under two minute “The Bees,” which should get you all stirred up” – The Fire Note