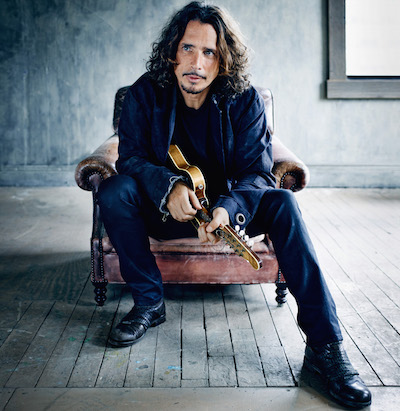 Following the huge success of his recent U.S. tour, Cornell will bring his Higher Truth tour to Europe starting on 23rd March in Reykjavik, Iceland, before crossing the continent. The tour will see Cornell’s first ever show in Russia when he plays Moscow on 26th March, and one night at London’s prestigious Royal Albert Hall on 3rd May. Each headline show venue on the tour has been selected to host Cornell’s widely acclaimed and intimate acoustic live performance, which has generated standing ovations every single night on his U.S. tour, and will give fans the chance to see him play his one-man show which has been received with critical acclaim.

Full list of dates and below – go to www.chriscornell.com for full on-sale information.

Cornell will perform a career-spanning set at each show, including tracks from his new album Higher Truth’ which was described by Metro as “heartbreakingly effective”, with Kerrang! Magazine proclaiming it as ‘one of the best records Chris has made in the last 15 years.”

Chris Cornell 2016 Solo-Acoustic Tour Dates:
All tickets on sale 10:00am Friday 30th October, apart from Iceland which goes on sale on November 12th and Israel shows which are on sale from today. Head to www.chriscornell.com for full on-sale information.

Chris Cornell:
Chris Cornell is a modern icon who transcends genre. He was the chief architect of the 90s grunge movement and remains one of the most iconic rock voices of all time. Achieving multi-platinum success with three legendary bands – selling over 30 million records worldwide – he has forged his own unique identity over three decades as a Grammy award-winning, Golden Globe nominated singer, songwriter, guitarist, composer and lyricist.  His career began with Seattle trailblazers Soundgarden, whose wild soundscapes combined visceral punk attitude with artistic depth. Powerfully original, they were the first of their generation of Seattle bands to sign to a major label in 1989 and their work continued to evolve over the course of seven groundbreaking albums. Soundgarden made a historic return to the live stage in 2010 and have since toured the world, releasing the all-new studio album, KING ANIMAL, to widespread acclaim.

Cornell has continually redefined his sound and vision.  In 1990, side project Temple of the Dog saw him experiment with a more soulful style alongside the future members of Pearl Jam. Later in the decade, his critically acclaimed solo album EUPHORIA MORNING combined lush melody and instrumentation with lyrics which spoke of alienation and despair. And as the millennium turned, he joined with three other musical pioneers from Rage Against the Machine to create supergroup Audioslave. The multi-platinum band released three albums and toured stadiums around the world, becoming the first American rock group to perform a massive free concert in Castro’s Cuba.  Cornell has also collaborated with many different artists, most recently the Zac Brown Band on their single “Heavy Is The Head”, which peaked at #1 on rock radio in the US.

His soundtrack work has spanned both big budget and independent cinema. He was the first male American artist to write and perform the theme song for a James Bond movie (“You Know My Name” for Casino Royale).  With Soundgarden, he wrote the end title song “Live To Rise” for The Avengers, the 3rd highest grossing film of all time.  He duetted with Joy Williams on his song “Misery Chain” which appeared on the soundtrack of the Oscar-winning 12 Years A Slave and his song “The Keeper” from Marc Forster’s Machine Gun Preacher was nominated for a Golden Globe in 2012.

Cornell’s recent solo acoustic ‘Songbook’ tour attracted sellout crowds and critical acclaim worldwide.  Jim Farber of the New York Daily News observed, “sometimes you don’t recognize the full power of a voice until you strip everything away from it.”  The tour’s reinterpretations of classic Cornell songs are featured on his 2011 live album of the same name.

Red Room Therapy Unveil New Video For ‘All in The Mind’