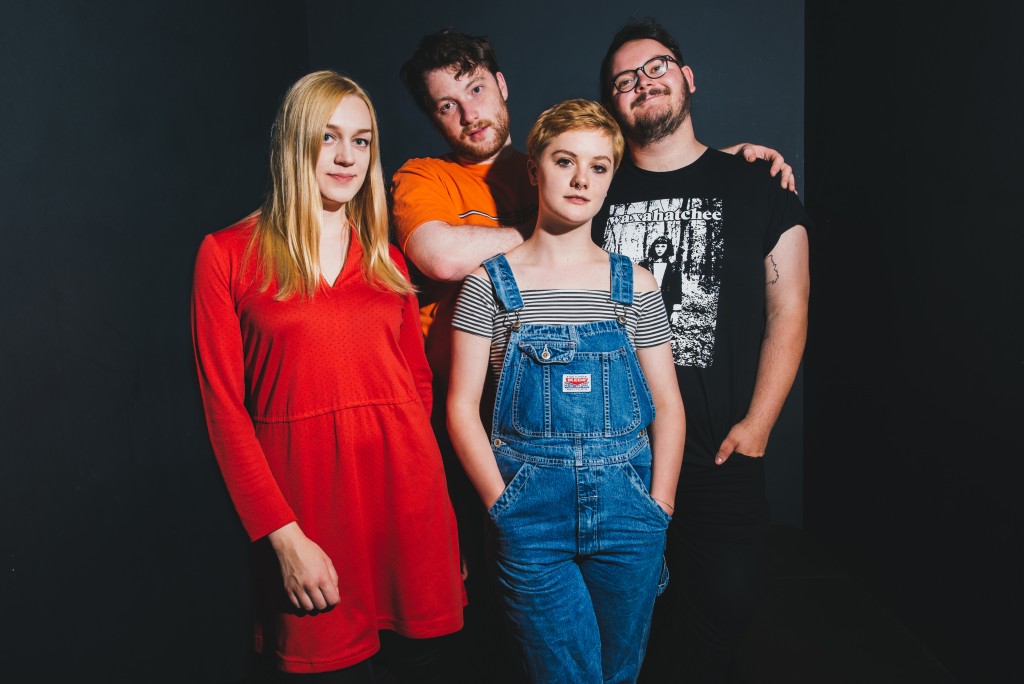 Gearing up to hit the road with Los Campesinos! next month plus a new headline show in London (dates below), Bruising have unveiled the new video for ‘Emo Friends’, taken from their upcoming AA single.

Guitarist Ben Lewis says of the food-fighting, limo-cruising visuals, “The idea was to kind of play on the whole ‘moody band’ in videos and photos thing ‘cos we’re so far from that… We wanted to include loads of our friends having the best time while we look pretty pissed off about the whole thing. The end of Emo Friends is my favourite part of our set, it’s such a release to play, feels really cathartic, so I guess the food fight at the end is trying to capture that, and we all know there’s nothing more cathartic than getting punched in the face with a piece of chocolate cake.” Watch it below…

Less than a year has passed since Naomi Baguley spotted Ben Lewis wearing a Perfect Pussy t-shirt in a Leeds nightclub and they began trading song ideas through phone voice memos. A first batch of ramshackle demos recorded in Lewis’ bedroom soon led to a sold-out debut show at Leeds’ Oporto, before Bruising began hosting a series of cult house parties in Hyde Park living rooms with the likes of Waxahatchee, Twin Peaks and Trust Fund. Word soon got out, and praise started coming in from the most unlikely of places – Andrew W.K, for instance and, in true fairy-tale style, Perfect Pussy’s own Meredith Graves.

Off the back of two stand-out contributions to compilations from the Beech Coma and Art Is Hard labels earlier this year, Bruising return with their debut single ‘Emo Friends’, with a re-recording of early demo ‘Honey’ making up the AA single. Now split between Berlin and Leeds as Baguley begins a year studying abroad, the band reconvened at Suburban Home Studios in Leeds to record the single with Hookworms’ MJ.

‘Emo Friends’ deals with the pains of helplessly watching both your own and your friends’ lives falling apart, and all that you can do to combat it is to have fun with them. Infectious guitar melodies contrast with Baguley’s softly layered cries of “I want to feel okay” before the song climaxes, in Lewis’ tongue-firmly-in-cheek words, “like the big smoocher hit at the end of an American teen movie circa 1999”. ‘Honey’, on the other hand, is a re-recording of the first song the duo wrote together, transformed from bedroom demo to straight up pop-punk hit. Baguley and Lewis try and out-do each other throughout, with floating vocals and ever-more venomous guitar lines thrown back and forth.

‘Emo Friends’ / ‘Honey’ is released 20th November on 7” vinyl and digitally via Beech Coma. The single is the first instalment of a new bi-monthly subscription series from the label, part-funded by Arts Council England. Pre-order the single and/or sign up to the Beech Coma Singles Club here.

“Bruising have been preventing me from careening into ennui… This kind of shit gives me hope.” – Pitchfork

“The pick of the bunch, a sugary rush of noisy Pixies guitars and singer Naomi Baguley’s soft, sweet and addictive vocals” – NME

“The best new guitar band in the country” – GoldFlakePaint