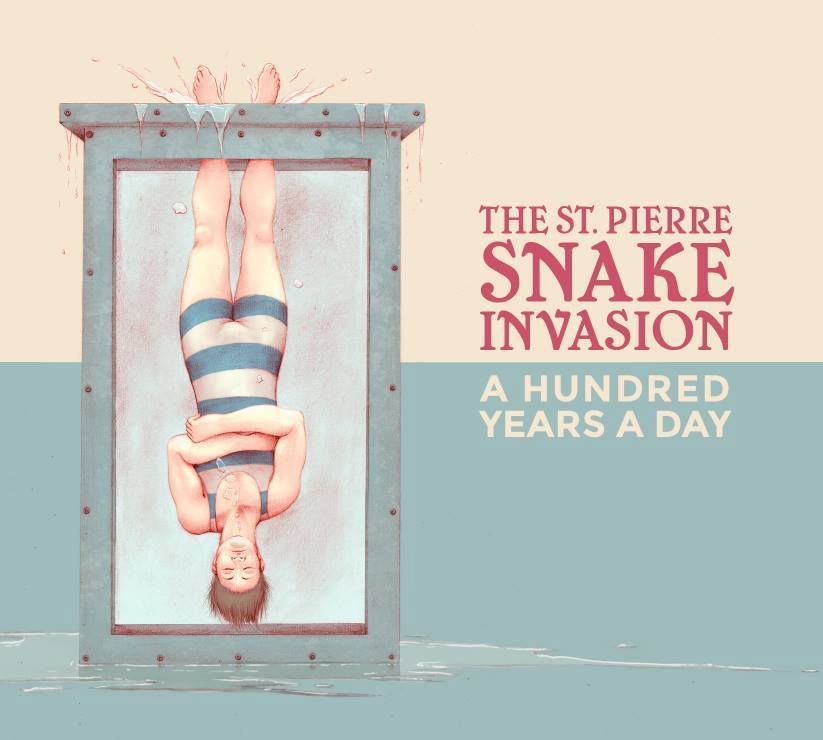 A Hundred Years A Day

If raucous and high energy rock n roll from The Stooges and the MC5 through to The Bronx and Refused is your thing, then look no further, you have found your new favourite band.

The band mean business from the start with the ball of energy opener that is Thanks But The Answers No kicking things off here, a song that doesn’t mess around and is over before you know it, all clattering drums and manic vocals reminiscent of unhinged likes of The Cramps and The Stooges. No frills punk rock meets a distinctly lo fi garage style. This is how to start an album!

The groovier and magnificently titled David Ickearumba follows and continues the momentum with the song detailing various conspiracy theories in more of the same of the raucous rock n roll, with vocalist Damien Sayell wailing his heart out at various parts of the song while the band seemingly chaotically but in complete control crash through the track.

The pace is slightly slowed down for When I see A Sycophant Fly, a sleazy dirge that sees Sayell sarcastically spitting “I’m your biggest fan” over and over as the chorus. The St Pierre Snake Invasion have a knack for cutting commentary on modern society and this is none more evident than on When I See A Sycophant Fly. The angry and pissed off crescendo at the end of the song defines a definite album highlight.

The complete tear out of Rock N Roll Workshops is a fast punky thrash that is over in the blink of an eye while Sex Dungeons & Dragons (the band have a knack for fantastic song titles!) is a bass led lurch offset with some extremely angry vocals that get angrier as the song goes on and some pounding riffs. As the song ends someone says “That was fucking awesome man” and you can’t disagree at all.

Like A Rag To A Red Bull harks back to chaotic early hardcore and only lasts for 41 seconds in a pissed off frenzy and while Jesus, Mary & Joseph Talbot lasts longer it is just as unhinged in its primal fury.

The scathing The Great Procrastinator is undoubtedly a live favourite in waiting with some excellent lyrics that would sound amazing when chanted back to the band (such as “I sold my soul to the highest bidder for a house on the haunted hill, I don’t need God to save me but it’d be nice if he paid my bills” and the song has an unsurpassed energy to it that would get any crowd going.

Refauxlution and the albums title track follow, the former a scathing, jerky track that sounds like garage rock meets Public Image Ltd and attacks any fake, would be revolutionaries with the screamed line “The revolution is a hoax” while the latter starts off at a menacing, crawling pace before picking up slightly and sounding angrier than anything that has gone before and ends in that menacing fashion.

A Hundred Years A Day ends with the probably the best title on the album, If The Only Way Is Essex You Can Kill Me Now, an anthem for the underdog featuring the refrain “Children of the elephant man” and the energy levels are set to kill on this one.

Rarely does music sound as defiant and vital as it does in the hands of The St Pierre Snake Invasion and this is a band that not only talks the talk but walks the walk too in impressive style and there is an energy and attitude to the band that you cannot fake. The band are the perfect antidote to any preening, manufactured, hyped up artists doing the rounds today and their songs and lyrics are perfect sneering commentaries on society today.

With imminent live dates approaching, I would recommend that everyone picks this album up and goes and sees the band in their natural habitat and to hear these songs live. One of the years best and The St Pierre Snake Invasion truly deserve to be massive.

As stated in support of the forthcoming insatiable release the must see quintet will be touring the album across the UK. Be sure to catch the act at the following dates.

Thurs 8th Oct: The Square, Harlow (with I Cried Wolf)

Sun 11th Oct: The Flapper, Birmingham (with I Cried Wolf)

‘A HUNDRED YEARS A DAY’ IS NOW AVAILABLE FOR PRE-ORDER!