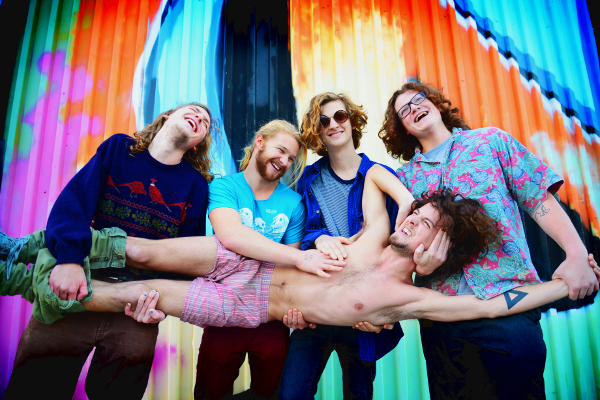 “Sun Club transport the listener to a place where the weather knows no downpour and imagination knows no bound.” –  Best Fit

“…a driven take on oddities, where substance meets outward-thinking head on.” – DIY Magazine

The members of Sun Club (Shane McCord, Adam Shane, Mikey Powers, Devin McCord, Kory Johnson) became a band as childhood friends over ten years ago and with the release of a well-received 7” and EP have toured endlessly ever since, moving from basement gigs to bars to opening up shows for the likes of Alvvays, FIDLAR, and Fat White Family.

You can now listen and share the catchy and bright new track ‘Summer Feet’. The band are are also streaming a live session of previously heard track ‘Tropicoller Lease‘.

Sun Club set about recording The Dongo Durango using an old warehouse space just outside of their hometown as a makeshift studio. They recorded the album live, all the better to capture the raw and raucous energy of their concerts. There they channeled influences of fellow Baltimore greats from Future Islands to Dan Deacon, as well as drawing from their own musical libraries that include DEVO, The Beach Boys, and The White Stripes.

Now looking to the future, Sun Club plan to spend the better part of this year and next on the road to support the new album. After all, relentless touring, crisscrossing the country in a van named Booty, winning the hearts of new fans with every date, is what got the Baltimore band here in the first place.

“Our beloved van Booty caught fire the day we announced [The Dongo Durango],” says Kory. “We have now got a new van which we will be naming Booty 2.0. It’s symbolic of a new era to us; a new chapter for us as The Dongo Durango becomes public to the world.”