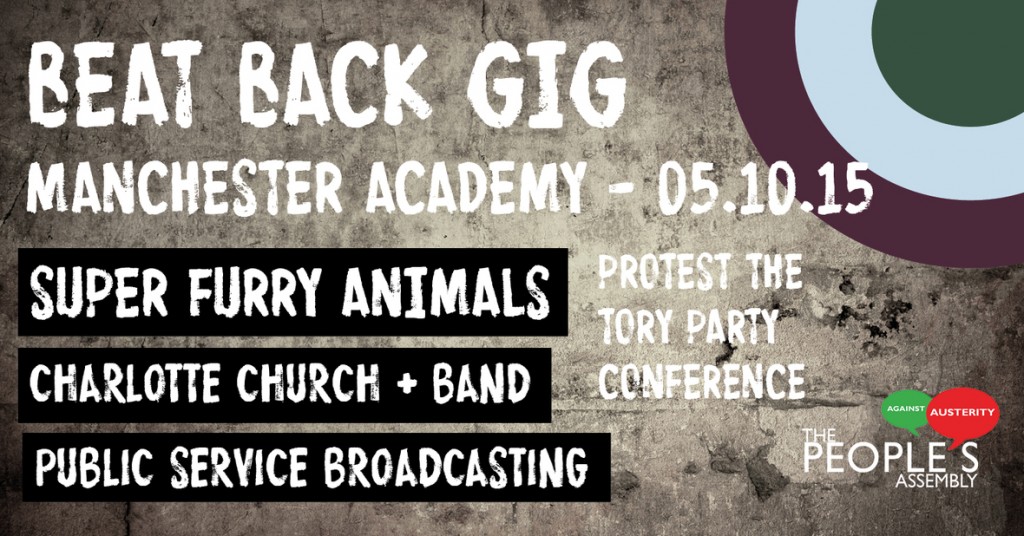 WHEN: Monday 5th October 8pm
The gig will be part of The People’s Assembly’s National Week of Action to protest the Tory Party Conference 3-7 October.

“I profoundly disagree with so many of this government’s policies – attacking trade union rights, making the poorest and most vulnerable in society pay the biggest price for their cuts to public services, their privatisation-by-stealth of the NHS, their total undermining of any sort of green or environmental movement, their upcoming hatchet-job on the BBC to appease private media owners, and most recently and shamefully of all their callous, self-serving and woefully inadequate response to the biggest refugee crisis in Europe since the second world war. We’re very happy to be playing at this event and taking a stand for a better, fairer, more tolerant and compassionate society.”
– Public Service Broadcasting’s J. Willgoose, Esq.

“What has happened in established politics is nothing short of criminal, testing our faith in humanity. We see blatant, systematic rebalancing of the books, favouring private greed over public wealth, to ensure the deserving majority is left with nothing in favour of an immoral minority. The Tory government and the coalition before them have worked harder to protect this imbalance than anyone, ruling through deception and fear. This is our musical response to those injustices and we ask our listeners to consider whether members of the political and business elite really have their best interests at heart.”
– Super Furry Animals

“I’ll be there for the People’s Assembly week of action against the Conservative Party conference because austerity is but another shiny bauble to bewilder us with, and yet the cuts that are taking place threaten, not just livelihoods, but lives. This government is extreme in its ideology and is a genuine threat to our freedoms, our privileges and our economic future. We have a democratic responsibility to oppose this government, and we can sing songs while we do it. Let’s do something good!”
–Charlotte Church

“Austerity is ruining the lives of millions of people. This Government has made it clear what it’s priorities are, punishing the poorest and most vulnerable in society while they and the millionaire mates continue to grow wealthier. For every day they are in Manchester the growing Anti Austerity movement will be there too.”
-Sam Fairbairn, National Secretary – People’s Assembly Against Austerity

The week of action called by the People’s Assembly Against Austerityagainst the Conservative Party conference from 3-7 October in Manchester.
It follows the 250,000 strong demonstration in London in June organised by the same organisation.

Thousands are expected to travel from across the country to join the protests which include a National Demonstration organised by the TUC, direct action, public rallies, comedy, theatre, gigs and more.