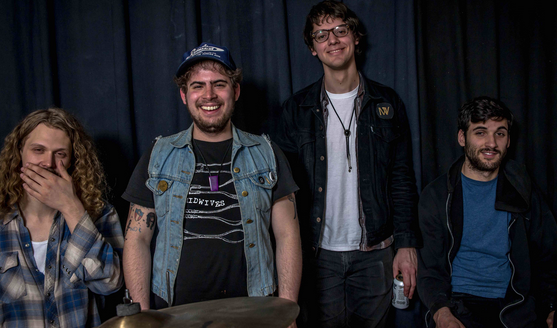 Milwaukee, Wisconsin’s Midnight Reruns are here to remind you that guitar music will never die, and to prove it, the band has announced their sophomore full length, Force of Nurture, due out October 23rd via Dusty Medical Records.

Produced by Tommy Stinson of The Replacements, Force of Nurture is certainly inspired by music of Stinson’s band, but Midnight Reruns are far from a retread of the past. Nerdistpremiered the album’s anthemic opening track “There’s An Animal Upstairs” calling the song “timeless” and “nostalgic but contemporary.” With elements of punk, rock & roll, and power pop all rolled into a charmingly loose package, Force of Nuture feels like a love letter to guitar-driven music that Midnight Reruns clearly cherish.

Preorders of Force of Nuture are available HERE. Midnight Reruns have announced a lengthy run of United States tour dates in support of Force of Nuture, which include an appearance The Fest 14 in Gainesville, FL.

Listen to “There’s An Animal Upstairs” via Nerdist:
http://nerdist.com/premiere-midnight-reruns-pump-out-timeless-guitar-music-on-theres-an-animal-upstairs/