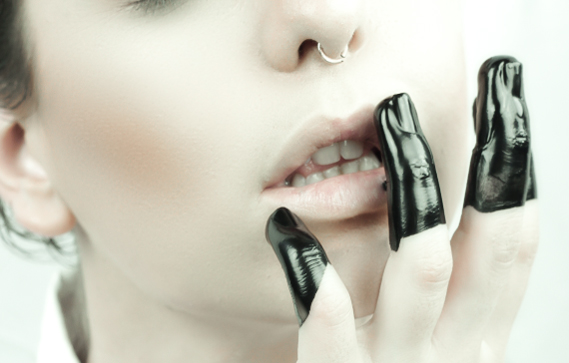 On the heels of her official remix for Sub Pop’s clipping., KANGA brings us the first track
from her upcoming debut EP, ‘Dissonance’.

Kanga wields the power of objectification. Fetish, sexuality, angst, and melancholy take shape, bringing the dark miracle of life to song. Mechanization & melody are made from fragments of Kanga’s own flesh and soul to become her objects of creation. Meanwhile, Kanga herself prefers to remain obscured as an artist; not in complete opposition to being an icon, but to explore the tension between the cold world of industrial and the hyper-surreal feminism of pop. Hers is a mirror world where objectification humanizes the object.

Amidst clockwork production and often severe lyricism, Kanga opens a door to the listener’s humanity as well. On her debut EP, daydream melody and bubbly hooks are an invitation to join Kanga in these otherwise cold observations.

‘Dissonance’ drops on Oct 30th, via the artist. She will perform that night at the Highways Performance Space in LA for the release party of the film ‘Excess Flesh’. Also performing will be True Neutral Crew, Yo! of BLKHRTS, and a new band from Jonathan Snipes of clipping.

Her EP, ‘Dissonance’, drops on Oct 30th.
Be sure to check our her official remix of clipping. as well.

THE MANIC SHINE Premiere ‘Hold On’ Video With Kerrang! Magazine‏