IS TROPICAL
Black Anything
The New Album
Recorded Across Five Continents, Released in Five Parts on 10” Vinyl
Third Installment – ‘FALL/LIGHTS’ ON 10″, OUT on 9th OCTOBER VIA NYC BASED AXIS MUNDI RECORDS 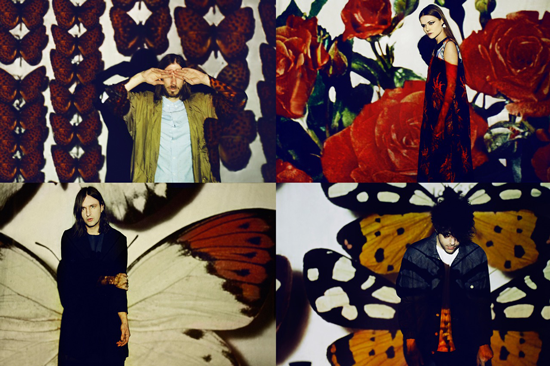 Late last year, IS TROPICAL announced their third album ‘Black Anything‘ would be released in 5 parts, one for each continent it was recorded in.
Now following the release of Pt.1 titled ‘Crawl/On My Way’ and recorded in North America, and Pt.2 “Cruise Control/Say” recorded in Europe, IS TROPICAL will release Pt.3 “Fall/Light On”, the African chapter, on October 9th via Axis Mundi. The first track was premiered by The Fader and can be streamed here:
HEAR ‘FALL’HERE: https://soundcloud.com/istropical/fall
Of Pt.3, IS TROPICAL say “When we first moved to Peckham over 10 years ago, there was this incredible buzz in the streets. People would be clad head to toe in African print fabrics, mishmash tracksuits with huge NIKE emblems emblazoned across everything, ill fitting gowns and trousers. Naturally, due to being immersed in these surroundings we started dressing in battered old jumpers, rolled up ‘old man trousers’ and wearing african prints and ridiculous jewellery. We were squatting at the time in an old 4 storey Georgian mansion. It was incredible, it was where IS TROPICAL was born. Perhaps the environment we were in even went as far to inspire the band name? We can’t remember though, It was a long while ago and we had a booze sponsorship.

When we first thought of recording BLACK ANYTHING around the world in interesting and inspiring places, Africawas the place we were most excited about. Since we moved from Peckham in 2010, London felt like it had lost a little of its ramshackle charm. Everything had been cleaned up, refurbished, and polished beyond recognition. We started wearing jeans without holes in, If we pissed ourselves when drunk we’d actually wash our trousers, even top buttons on shirts were being done up, It didn’t feel right. The creation of the band was born out of these grimy, vibrant places full of energy and abandon. When we arrived in Africa, it felt recognisable and almost like home. There was no culture shock, the lack of snobbery was evident on first meeting the locals. They bought us beers, shared their weed, and partied into the night with us like they’d known us forever. We went to the arts markets and bought homemade instruments, they were crap, out of tune and poorly put together, just like us. Everything made sense, it was genuinely inspiring to hear a 3 note looped rhythm being played over and over for an hour. People think that listening to complex arranged music recorded with hi-fi production blasted across radios is inspiring, it can be, but it doesn’t connect like the raw energy of 10 street kids laughing and making spontaneous music together does.

We didn’t want to make African sounding songs when we were out there, we wanted to utilise the surrounding environment to make IS TROPICAL songs. We didn’t want to come away with a Paul Simon ‘You can call me Al’, but we did want the incidentals of African life to seep into the songs. Every taxi you get into has the radio blaring at full volume, the poor signal combined with speaker rattles in the knackered cars create an unmistakable distortion. Simon did an impromptu guitar solo with his mouth on ‘Lights On’ that we cranked through an old stereo to get the same feel. It sounds ridiculous, but that’s it’s charm. The lead hook in ‘FALL’ (in the instrumental break) was initially written on a tobacco tin thumb piano. It had 6 little notes you could pluck at, but only 3 of them made any sound so we ended coming up with a super simple rhythmic riff. It’s naive, but fits the song perfectly. On ‘Lights On’ we overlaid a drum machine beat played crudely from an iPhone to reference the old drum machines so often found in old african songs.

Throughout the slums of Jamestown there is a layer of dust and dirt that coats everything. These songs are no different, we abandoned all we’d learnt before to allow these songs to be natural, spontaneous, rough and real, just like the continent they were recorded in. We left having made some amazing friends, dressed head to toe in African suits and shitting throughout the eye of a needle. AWESOME!!!”

IS TROPICAL are currently playing a few shows in South America before they return to Europe, where they have a few dates lined up in October and more to be announced soon.

12 OCTOBER – Mascotte – Zurich, SWITZERLAND
13 OCTOBER – L’Amalgame – Yverdon-Les-Bains, SWITZERLAND
14 OCTOBER – Le Sonic – Lyon, FRANCE
15 OCTOBER – L’Aeronef – Lille, FRANCE
16 OCTOBER – MAMA Festival – Paris, FRANCE
20 OCTOBER – Lille Vega & Vega Lounge – Copenhagen, DENMARK
21 OCTOBER – Tavastia Klubi – Helsinki, FINLAND
22 OCTOBER – Rockefeller – Oslo, NORWAY
23 OCTOBER – Inkonst – Malmo, SWEDEN
24 OCTOBER -Inkonst – Malmo, SWEDEN
LISTEN TO ‘BLACK ANYTHING – Pt.1’: https://soundcloud.com/istropical/sets/black-anything-pt-1
LISTEN TO ‘BLACK ANYTHING – Pt.2’: https://soundcloud.com/istropical/sets/black-anything-pt-2
IS TROPICAL are set to release their third album Black Anything this year. Originally formed in 2009 as a trio- Dominic Apa, Gary Barber and Simon Milner- the band has now added vocalist Kirstie Fleck, who was featured on the 2013 track “Dancing Anymore.” Working alongside producer and collaborator Luke Smith (Foals, Depeche Mode), IS TROPICAL set out in the summer of 2014 to record across five continents; North America, Africa, Europe, Asia and South America.
The result, Black Anything, will be released in five 10” transparent picture disc installments, containing 2 tracks per vinyl. The artwork is a visual representation of both the recording process and the release with each 10 vinyl displaying the continent in which the tracks were recorded. The five vinyls when displayed on top of each other create the globe, unifying the concept as a whole with each vinyl existing as an art work and tribute to the continent it was recorded in. The band started the project in North America, building a studio during the label’s foundation in Brooklyn.
www.facebook.com/ISTROPICAL
www.twitter.com/istropical
www.istropical.com
www.instagram.com/istropicalofficial
www.soundcloud.com/istropical
www.youtube.com/IsTropicalVEVO