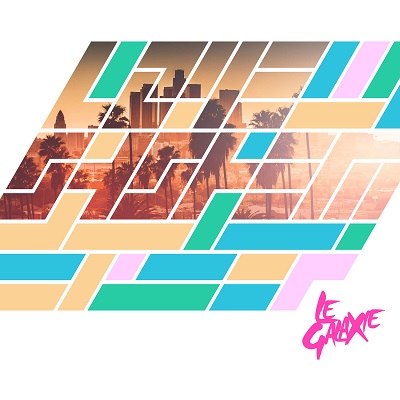 “Over the past two years, [they] have  transformed themselves into a juggernaut of a party band, jack knifing into crowds who are only too happy to take the hit”   – The Irish Times
Dubbed by Hot Press as ‘Ireland’s outstanding party band’, electropop four-piece Le Galaxie announce the release of their latest single, ‘Love System’ on 25th September.
Featuring shimmering synths, swirling beats and evocative hooks ‘Love System’ is a true ode to 80’s technopop. Showcasing the band’s mastery of the heart-bursting hook, the hazy saxophone solo adds a sense of mystery to the tracks melodic propulsion. Whilst maintaining Le Galaxie’s boundless energy, the warm vocals from guest singer Elaine Mai add a human depth, creating the perfect synthpop anthem.
The track is the first single taken from the English release of their second album ‘Le Club’, set for November 2015. Mixed by DFA engineer and producer Eric Broucek, whose impressive portfolio includes engineering for LCD Soundsystem, producing for !!! and mixing for Hercules and Love Affair, the album has been described by Nialler9as ‘a rare thing, an album of joyous bangers that works in any environment, le club, the festival and your headphones.’
Using its powerful message, ‘Love System’ was adopted as an anthem for Ireland’s recent Marriage Equalitycampaign, seeing the band launch ‘Love System: A Night For Marriage Equality’ to raise funding for the cause. The single is also completed by a remix from fellow Irish electropop duo Young Wonder, which adds a new twist to the original retro sonics.
The visuals for the track have been directed by Feel Good Lost, whose video for Hozier’s ‘Take Me To Church’ has seen nominations for two MTV VMA Awards. Inspired by classic American films like Natural Born Killers, the cinematic video explores a captivating relationship between an unhinged couple featuring Rúaidhrí Conroy, the lead character inMartin McDonagh’s Oscar Winning Short Film ‘Six Shooter’.
Known for their awe-inspiring performances, Le Galaxie have become a formidable live act. Having notched up memorable live shows at internationally renowned festivals such as Secret Garden Party, The Great Escape, Latitude, CMJ and SXSW, the band are set to headline Ireland’s distinguished Electric Picnic on 6th September.
With an ever growing fan base, a recording contract with Universal Music Ireland, a publishing deal with Major Lazer, MØ, and M.I.A’s USA-based publisher Reservoir and with the release of ‘Le Club ‘in additional territories, they’re set to be a real force to be reckoned with.