For fans of: The Raveonettes, The Cramps, Wounded Lion

The track premiered on Clash Magazine‘s website, who described it as “Virile, attitude-laden rock music..”. You can download the song for free via the ABoF SoundCloud page

You can also stream single Drunken Grrrls, which has already been featured as a ‘6 Recommends’ track on Steve Lamacq‘s BBC 6 Music show, via the ABoF SoundCloud page.

Drunken Grrrls will be the first cut from their forthcoming long player and will see the band continue to explore their blend of garage-surf rock and powerful riot grrrl vocals as heard on previous singles Crash (Too Pure Singles Club, 2014), and Isabelle (Joy Formidable split single, 2015) – which has seen them gather attention over the last few years.

Beach Fatigue have previously played alongside the likes of Menace Beach, Eagulls and Evans the Death, and have played at Green Man, Reading & Leeds Festivals and return to Swn Festival in November this year.

Since their inception, the band have received continuous support from BBC Radio Wales’ Adam Walton and Bethan Elfyn. And since their surprising appearance at Cardiff’s Swn Festival in 2013 – which saw them receive a 9/10 from NME’s Laura Snapes – they’ve received plays from Radio One (Huw Stephens, Jen & Alley), 6 Music(Tom Robinson, Steve Lamacq, Nemone), Amazing Radio (Shell Zenner, Simon Raymonde, Gill Mills) and XFM (John Kennedy). Whilst blogs like Sweeping the Nation, Little Indie Blogs and God Is In the TV have followed their progress with glowing reviews. 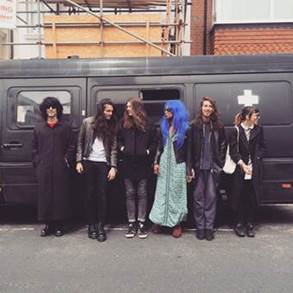