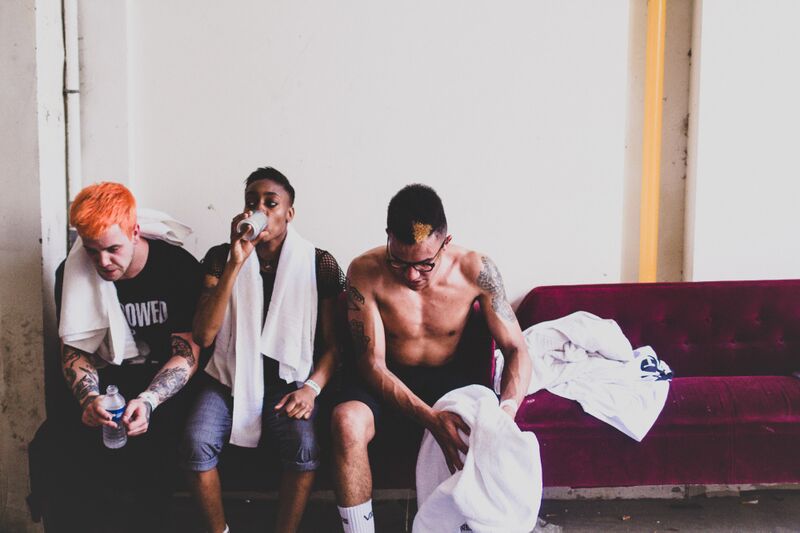 Ahead of their forthcoming debut appearance at Reading & Leeds Festival on The Lock Up Stage this weekend, Birmingham noise-punk trio YOUTH MAN are pleased to announce they will support Brighton band Tigercub on their headline UK tour dates this November.

To celebrate the news, the trio are pleased to reveal the video for brand new unreleased track ‘Pigs’ which was directed and filmed by long term friend of the band Chris Jackson, who also created the videos for previous singles Heavy Rain and Skin videos. You can download the track for free from their official bandcamp page here.

“This was probably our favourite video to film so far” says drummer Marcus Perks “I found yet another excuse to get my body out. We just got to make a mess and be a bit sadistic for a few hours. The guy in the chair is Ike, who produces most of our music. He was in the Skin video too, and it’s his fist in the Joy video that smacks us in the face. We wanted him to throw up but clearly he is a monster. We managed to force feed him about 15 burgers, one after the other, before he started to choke cos the burgers were so dry. It got pretty intense. In retrospect we should’ve got cheeseburgers so the cheese added some lubrication to the situation.”

Commenting on the tour, front-woman Kaila Whyte said; “We played with Tigercub last festival season and they were awesome. This is our longest tour to date and we’re stoked to be sharing it with these guys. There are a few places we still haven’t played so it’ll be cool to pop some cherries.”

The band will also be appearing at a show with Modern Life Is War in Glasgow, before heading to the EU with German punks Adam Angst this October alongside Cologne quartet KMPFSPRT.

Fresh from a summer run of festival appearances including Hevy Fest, Montreux Jazz Festival and Wickerman in support of their latest EP ‘Hill of Knives’, this caustic and visceral punk trio are out to defy conventions, perceptions and expectations of what makes a modern punk band. Their dedication to presenting an honest and undiluted version of their music has led to them charming critics and audiences alike, with the new EP stacking up critical praise from Rolling Stone, Alternative Press, BBC Radio One, NME, Clash Magazine, Artrocker, Drowned In Sound, Rock Sound, DIY and many more.

‘Hill of Knives’ is out now and can be purchased here.