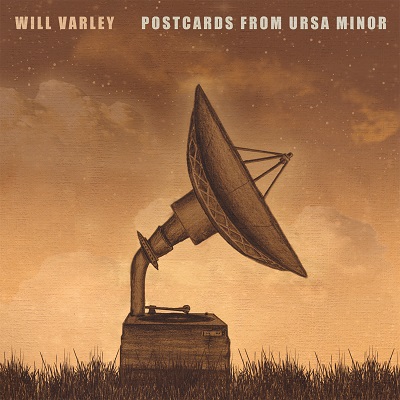 Powerful, political and pertinent” by the Independent
One of Time Out’s rising stars of 2015, Will Varley has unveiled details of his forthcoming album. ‘Postcards From Ursa Minor’ will be released on 30th October 2015 on CD, vinyl and download through Xtra Mile Recordings.
Pre-order here: https://itunes.apple.com/gb/album/postcards-from-ursa-minor/id1029943096
Produced by Tristan Ivemy and mastered at Abbey Road by Frank Arkwright (Arcade Fire, Blur) ‘Postcards From Ursa Minor’ is a master-class in song-writing that pushes the boundaries of the ‘one man and a guitar’ format. From rowdy drinking songs with sprawling chaotic arrangements to his sparse solo performances he covers a range of subjects with his trademark sprinkling of social commentary, politics and wry humour.

Observing the world and the plight of humanity as if perched cross-legged on the edge of the moon, Varley’s existential themes cover the planet’s lonely existence within the universe as well focusing in to tackle the everyday minutia of human life.
‘Is Anyone Out There’ is a tongue in cheek call to any alien life forms that may be out there, to come and help us stop destroying the Earth. The track has actually been transmitted out into space using a 20 foot parabolic satellite dish in the US. We await a response!

‘The Man Who Fell To Earth‘ tells the story of Jose Matata, an African immigrant whose body was found in a quiet suburban street one morning after falling out of the fuselage of a British Airways plane above London in 2009, attempting to illegally gain entry to the UK. It’s a powerful and timely piece of social commentary.

Songs like ‘Outside Over There’ and ‘Talking Cat Blues’ show off Varley’s storytelling prowesss while ‘Seize The Night’ and ‘From Halcyon’ take a more nostalgic approach, lamenting lost friends and times past.

Will signed to Xtra Mile Recordings backstage at the Royal Albert Hall just moments before he performed on stage supporting Frank Turner as part of the Teenage Cancer Trust charity gig. The 27-year-old rambling singer-songwriter from Kent is a self-made man who, on one recent tour, walked 500 miles with a guitar on his back, playing shows along the way. He makes his own music videos. He runs his own record label and music festival, Smugglers. As if mirroring his work ethic, his songs pack narrative detail. Each three or four minutes is earthy and punchy, rolling and rollicking upon barely-concealed anger, or blatant piss-taking.