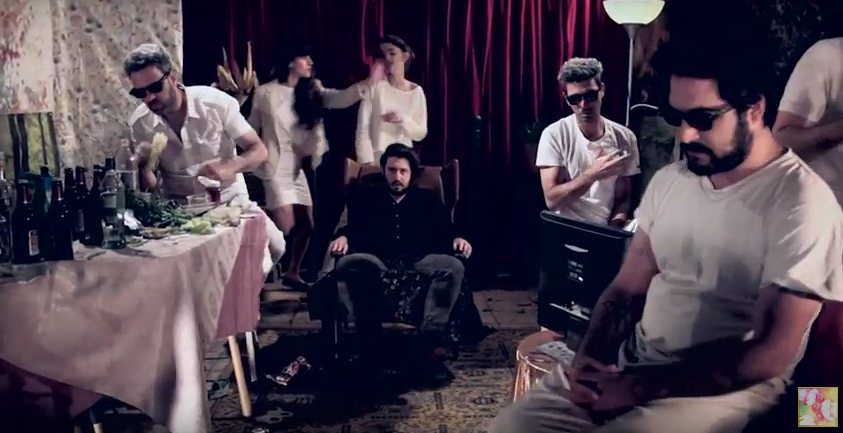 As Tel Aviv’s Vaadat Charigim prepare for the UK release of their new record ‘Sinking as a Stone’ on September 25th, they have shared a new video.

The video for ‘Hashiamum Shokea’ was directed & edited by drummer Yuval Guttman where he lives in Tel Aviv – the same place the album was recorded.

With a cast comprised of various active artists in the local Tel Aviv scene, the video is a potent portrayal of frustration and hopelessness, as singer Yuval Haring stares deadpan through a sea of repetitive actions, chanting the chorus:

‘Sometimes the boredom sinks in, and sometimes it overflows, god is all knowing, and Man returns to sand’.

“This new record is more complex for me. Instead of singing about missiles falling on a shopping mall and naming the missile and the shopping mall, I am taking the essence of that, and breaking it down to its basic mechanism; I am dealing with it piece by piece, as fragments. The first record was an impressionistic painting to me. I was observing the world. In time, I leaned more into inner observation and began a process of recording as expressing.”

‘Sinking as a Stone’ is the 2nd part of the band’s “Tel Aviv trilogy”, with most songs describing or dealing lyrically with local bohemian states of mind. It is a record that swirls with potent emotions and, whilst representing the listless state of mind of it’s creators, is still striking and absorbing, taking the listener on a journey of texture & mood.

Vaadat Charigim hint at influences from the likes of Ride and Slowdive but ultimately paint a story that is their own, injecting their own influences, a unique sense of intuition and all the aesthetic & rhythmic idiosyncrasies of the Hebrew language.