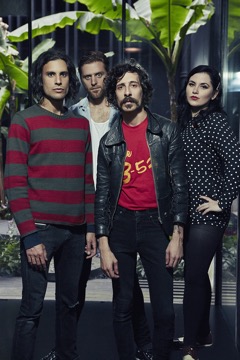 THIS WEEK
Support dates with Bring Me The Horizon
Reading & Leeds Festival, The Pit Stage

Riotous Bristolian rockers Turbowolf are excited to announce that they will be embarking on their biggest UK headline tour to date in October. Prior to that they will be hitting the States on a previously announced bill with Nothing More and Marmozets for a massive tour, and also taking part in the ‘Dr. Martens Stand For Something Tour Europe 2015’, stopping off in the likes of Paris, Amsterdam and Copenhagen.

And this week sees the band perform two tantalising warm-up dates for their Pit Stage appearance at Reading & Leeds Festival, with potential chart-toppers Bring Me The Horizon, in Oxford and Liverpool.

The band comment: “Turbowolf as a band is very excited about it’s forthcoming travels to such far flung and downright exotic places as Stockholm, Hamburg, Paris, Dallas, New York, Flint, Toronto, Nashville, LA…and everywhere in between featured on our European tour with Doc Martens, and then our US tour with Nothing More. As people, we’re burning with a kind of heat that comes from a terrible fever. This fever cannot be tempered without seeing all your wonderful faces, staring into those expectant eyes, and giving you all exactly what you’re looking for, and maybe a little bit more. The world is ours. Let’s do this.”

In amongst the far-reaching eccentricities that Turbowolf have made their own, the band have an impeccable ear for a hit, with current single ‘Solid Gold’ getting regular plays on Radio 1, following in the wake of previous radio hits ‘Rabbits Foot’, ‘Rich Gift’ and ‘Nine Lives’.

SUPPORTING BRING ME THE HORIZON 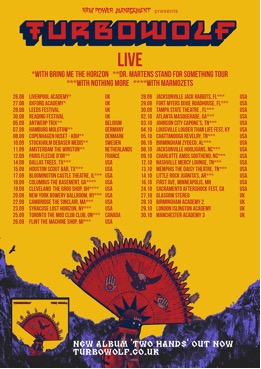 “At just 39 minutes, they’ve packed so much into this entirely mad record, you’ll be left happily exhausted by the end of it.” – Classic Rock

“A captivating mix of 70s styled retro rock, psychedelic zippiness and punkish alt-rock energy that will appeal to the crossover kids” – Metal Hammer

“Stuffed to the guts with Turbowolf’s distinctive rubber-buzzsaw riffs and Technicolour stomp, boding well for a strong showing from one of the UK’s most under-appreciated rock bands.” – Clash Music