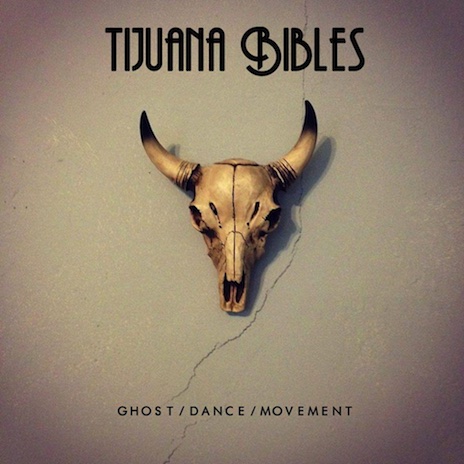 Both are released digitally on 4 Sept.

Ahead of its release, Upset have premiered the video for Tijuana Bibles new single Ghost Dance in all its “arena stomping glory” [Upset].  The single is taken from the Glasgow 4-piece’s new Ghost/Dance/Movement EP. Both are released digitally on 4 Sept.

Known for their live sets,  T in the Park Festival (where the band have been invited to perform for two consecutive years) called the live experience  “as thrillingly dangerous as the Mexican drug cartel town of their name”.  In the last 18 monthsTijuana Bibles have sold out Glasgow’s infamous King Tuts, played at Wickerman, Belladrum and Isle of Wight festivals (as well as the aforementioned T in the Park), supported Deap Valley, The Alabama 3 and The View and toured the Scottish highlands, en route to Sold Out shows in London, Manchester and Glasgow.

On the 5 Sept, the band kick off an extensive European tour in their homelands, Glasgow with a gig at Oran Mor and additional UK dates following in London (newly announced), Carlisle, Leeds and Manchester:

Full European dates can be found via: tijuanabibles.co.uk