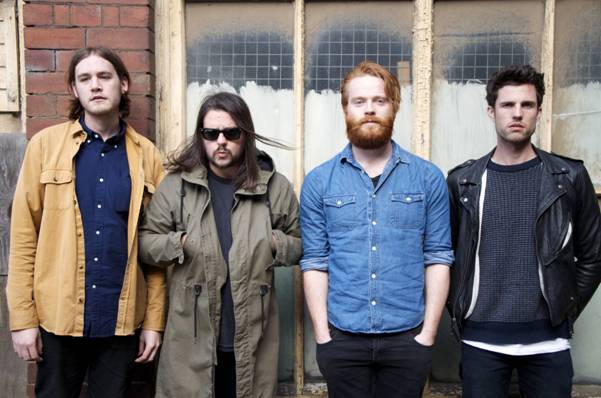 ‘My Amsterdam’ begins as an unassuming and frank ode to frontman Jon-Lee Martin’s home, before erupting into a hugely atmospheric climax. Of the track, Martin says: “my home is my Amsterdam and though flawed and frustrating it’s still where I’m most comfortable. I’m not a hermit ….yet, my door is always open but I’ve found a solace in isolation that I’m truly enjoying. My Amsterdam is the triumph of imperfection”

Then Thickens began as a bedroom project for Martin, formerly of masked noise-mob KONG. Following encouragement from close friend Jorma Vik from The Bronx a series of lo-fi recordings appeared online, before expanding into a fully fledged act, along with members Charlie Hartley, Sean Doherty and Thomas Griffin.

Debut album Death Cap At Anglezarke spawned three singles, all heavily supported from the likes of Steve Lamacq, Gideon Coe and Jarvis Cocker on BBC Radio 6 Music and Huw Stephens at BBC Radio 1. The album went on to receive a wealth of great reviews, and saw the band play shows alongside the likes of Biffy Clyro, Nine Black Alps, Vennart, Echo and the Bunnymen and Mariachi El Bronx.

Colic is a crude and real album, while a little exaggerated in parts it features a mix of characters and real people throughout the story telling. Upon reflection the album can seem a little dark, but there are strong melodies throughout which juxtapose the lyrical themes.

Colic is released 23rd October via Hatch Records. Then Thickens’ new album has been supported by the Momentum Music Fund. Momentum is managed by PRS for Music Foundation, supported using public funding by National Lottery through Arts Council England, and in association with Spotify.