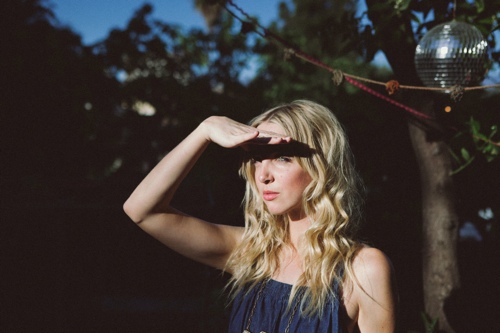 “I did loads of traveling to make this new record, and everywhere I went, I found my people,” Laura Burhenn, aka The Mynabirds, explains, noting locales as far flung as South Africa, and as close to her heart as Omaha, her home for six years before recently relocating to Los Angeles. “So when my manager called and said, ‘I met this woman who makes films with a collective called Dirty Girls, and I feel like you two should meet’, I took it as a sign.”

Laura was immediately intrigued by the Dirty Girls’ story: “I watched the documentary VICE featured of them back in high school in the 90s, and I knew at once we would’ve been best friends if we’d grown up in the same town.” In other words, it was only a matter of time. Their first meeting took place on a paddle boat in the middle of Echo Park lake, because “Why have a meeting on land when you could have it on the water?”

“The song ‘Wildfire’ is partly based on that Jack Kerouac quote (“The only people for me are the mad ones…”), and finding your people,” she continues. “So it felt fitting to be in a town that’s pretty new to me, but to feel totally at home in the company of these amazing babes. We made this video as an ode to making new friends and helping each other through dark times.”

In ‘Wildfire’ the women help a young girl pick herself back up after being pushed around by a bully, and the girl reciprocates by helping Laura face her own very real fear of roller coasters. “That coaster on the Santa Monica pier might not be much to most people, but dammit, I’ve been terrified of roller coasters all my life, so I rode it. And it was awesome. So much of my life I feel like Bill Murray in “What About Bob.” I’m scared shitless of so many things, but I do them anyway, cause I want to grow and life my life as full as I can. It’s all about the baby steps, y’all — and having friends to hold your hand while you take every tiny, single one!”

Led by Laura Burhenn and produced by Bradley Hanan Carter of Black English, The Mynabirds third full-length album, Lovers Know, explores influences of 80s, 90s, and futuristic soundscapes. The result is arguably one of Burhenn’s most personal and confessional works to date, yet also her most accessible, delving deep into universal themes of love, loss, and seeking connection. Lovers Know is out now via Saddle Creek and is available to purchase via the label’s website and iTunes.

About The Dirty Girls Project
The Dirty Girls Project is a new media platform devoted to the promotion of empowered, badass women of all ages. We create original content, synergistic partnerships and produce collaborations (both digital and physical) around topics such as art, adventure, fashion, entrepreneurship—the bad, the rad and the weird.

The Dirty Girls Project is inspired by the viral video Dirty Girls, a short documentary about a group of fearless, iconoclastic high school girls in the 90s. Building on global reaction to the video, The Dirty Girls Project reunites the original Dirty Girls, now successful professionals, with other like-minded and equally fierce women, with the mission of inspiring, influencing, and championing women and girls for personal, social and commercial success.