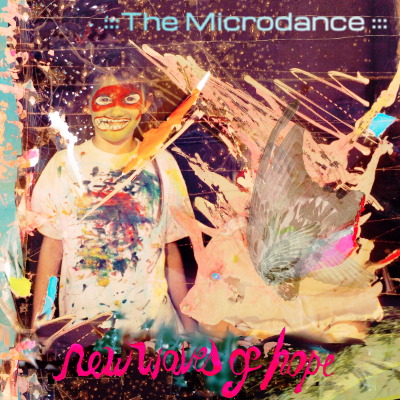 “The band combines the texture of shoegaze and fuzzy effects with the straight up power of yell along alt-rock, up to the power of new-wave …not sounding like any other band making music. What The Microdance does is totally spellbinding, and the video proves their tunes go with everything. What could be better than that?”
– Noisey

The Microdance have revealed the video for their debut single ‘Making Plans For The End’. Premiered on Noisey, the London four-piece, who create dramatic, dark and ethereal music, have shown their more humorous side with a Nosferatu inspired ‘hammy-horror’ video.

The track is taken from the forthcoming album New Waves Of Hope, which will be released digitally on September 25th with a physical release on October 21st through Superlust Recordings.

New Waves Of Hope is a sonic powerhouse of psychedelic tones, drenched in an uplifting pop-rock daze. Over its 14 tracks The Microdance deliver an album of dreamscapes and mood-beams opening with the firing anthem ‘We Meet In Dreams’; the perfect marriage of classy pop and new wave edge.

‘Come Back To Me My Lover In The Sky’ is fizzing with dynamic melody and 80’s pop undertones paving the way to the ballad ‘The City Was Cruel To Our Love’ which mixes elegiac passion with harrowing guitars and ethereal vocals. ‘Smithereens’ finds The Microdance exploring their metallic influences, turning it up with pounding drums and epic choruses, before the delicate and beautiful ‘This Malaise Is Over’ brings the album to a close with its dreamy echoing trance.

The Microdance are the brainchild of Alex Keevill who says, “New Waves Of Hope is an old fashioned kind of album in that it’s a varied opus designed to be listened to in full. We focused on picking a cohesive collection of songs; meaning that while the album is still rich and expansive, there is a strong aesthetic and emotional thread that binds it as a body of work. We had the pleasure of working with some fantastic people who all brought the album to another level with their unique assets.”

Elevating choruses and anthemic guitars are blended seamlessly together, showcasing the fact that British music is ever-evolving into new and exciting forms. And whilst blurring the lines of genre and preconception, The Microdance meticulously and effortlessly meld Shoegaze, New Wave, Goth Pop and Heavy Metal into an atmospheric explosion.

They play This Feeling at the Amersham Arms on Saturday, August 29th.