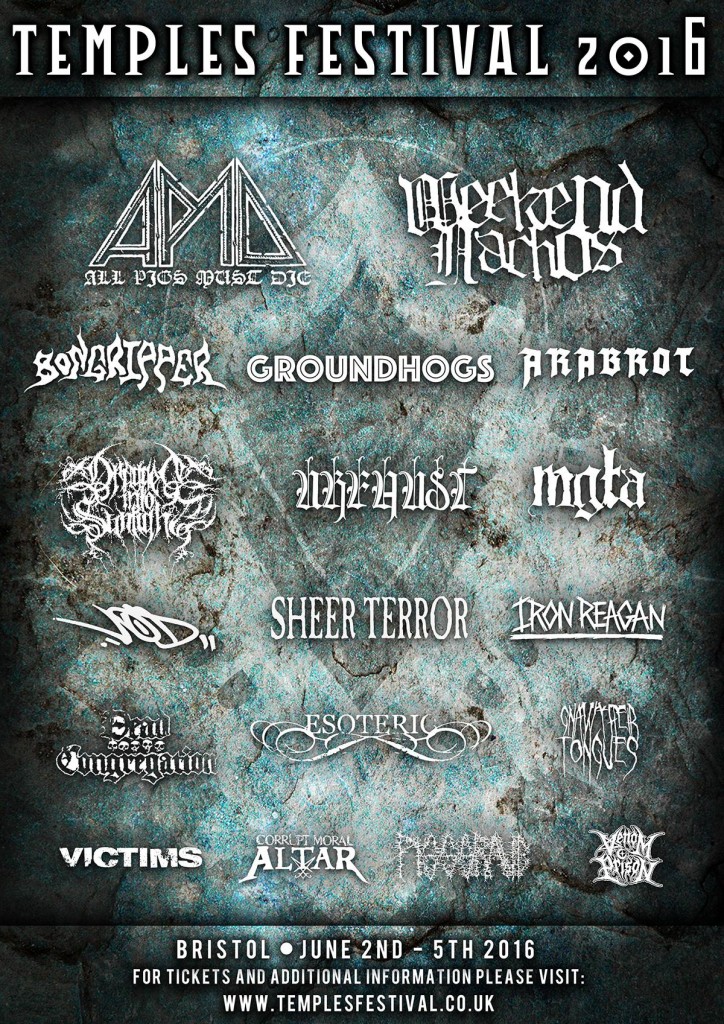 TEMPLES FESTIVAL 2016:
FIRST BANDS ANNOUNCED FOR JUNE 2ND-5TH, INCLUDING ALL PIGS MUST DIE, BONGRIPPER, DRAGGED INTO SUNLIGHT, GROUNDHOGS AND WEEKEND NACHOS
Temples Festival enters its triumphant third year, after two magnificent, sold-out editions that brought patrons in contact with some of the most revered artists operating in the spheres of extreme and heavy music. From the titanic international headliners (that have included Clutch, Converge, Earth, Electric Wizard, Neurosis, Pig Destroyer, SUNN O))) and Voivod) right down to the gritty native acts, there’s a strong sense of cohesion, community and celebration at Temples that evidently goes down a treat with heavy music lovers.
Three days of unforgettable appearances and high volume antics in the heart of Bristol are already set in stone for the dates of June 2nd-5th and with lessons learned, eardrums repaired, and justified excitement, we can announce the following eighteen acts for the highly anticipated Temples 2016…
ALL PIGS MUST DIE
ARABROT
BONGRIPPER
CORRUPT MORAL ALTAR
DEAD CONGREGATION
DRAGGED INTO SUNLIGHT
ESOTERIC
GNAW THEIR TONGUES
GROUNDHOGS
IRON REAGAN
MGLA
PISSGRAVE
SHEER TERROR
URFAUST
VENOM PRISON
VICTIMS
VISION OF DISORDER
WEEKEND NACHOS
With much more to be announced, including the three main-stage headliners as well as a vast array of bands from the international heavy underground, the countdown begins for Temples 2016…
Tickets are available exclusively through www.templesfestival.co.uk, and day tickets will become available as individual day splits are announced.
SOME PRAISE FOR TEMPLES 2015:
“Temples, not just a place, but a state of mind… The mecca of all things heavy and experimental.” – TEAM ROCK
“Temples is fast becoming not just a highlight of the festival season but a necessary pilgrimage.” – METAL HAMMER “The organisers deserve much applause for their bill they’ve put together this year, straddling heavyweights from as broad a selection of genres that anyone could wish for at a UK festival.” – ZERO TOLERANCE
“Temples 2015 was another huge success for a rapidly expanding behemoth of a festival, and some minor niggles with delays couldn’t change that. Well-organised, well-programmed, and with that line-up, the devoted hordes went home fully sated yet baying for more. They’ll come roaring back next year, and for many years to come.” – CRACK MAGAZINE
“Expect great things, after all, third time’s a charm and the first two attempts have been nothing short of extraordinary.” –MUSIC OMH
“Temples has built a solid reputation as one of the world’s ‘must go to’ heavy music festivals… It’s hard to conceive how a festival so young in its infancy can be so ‘on the money’ in every respect – and yet that is exactly what Temples Festival is.” – LOUDER THAN WAR
“Yet again, Temples has proven itself to be one of the most successful heavy music festivals in the UK right now – not only with a non-stop awesome line up, but with a well maintained atmosphere that cannot be faulted.” – ECHOES AND DUST
“All hell broke loose at this year’s Temples Festival… You can see that this festival is one of the best happening in the UK right now.” – CVLT NATION
“Violence, vitriol, volume – Bristol bends at the altar of the UK’s heaviest festival.” – KERRANG!
www.templesfestival.co.uk
www.facebook.com/TemplesFestival
twitter.com/templesfestival
instagram.com/templesfestival